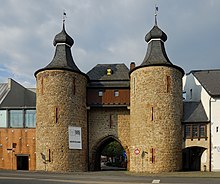 The Witches Tower , originally the "Rurtor", is the only remaining city gate (west gate) of the medieval city fortifications and the landmark of the city of Jülich . The Jülich City History Museum is located in the tower .

The Hexenturm is a typical Gothic city ​​gate of the double tower type. Its masonry consists of rubble stones, the towers are 12.75 m high up to the upper edge of the masonry and the masonry is 1.60 to 2.30 m thick. The gate passage is 4.70 m wide and 5.20 m high, it is provided with guides for a portcullis. A total of 17 loopholes for crossbow defense are available. The two towers originally had battlements reinforced with battlements , which were only replaced by onion roofs in the 17th century. Today, after the restoration in 1964, the gate wears onion helmets again. The frames of the four windows on the city side of the gatehouse date from the 18th and 19th centuries. On the outside of the north tower, the connection to the city wall that was built at the same time can be seen, which was 1.70 m thick at this point.

The Rurtor, the so-called Hexenturm , is one of three or four city ​​gates in the medieval city ​​wall of Jülich. Have the former military function nor the loopholes , the portcullis and the door openings for the walkway down. The witch tower was built at the beginning of the 14th century. The witch tower had many names back then. From “Porta Rurae” (lat. For “Rurtor”), “Rurtor”, “Gefangenenthürn”, “Gefängnußthurm”, “Hessenturm” until today's name “Hexenturm” was used since the 18th century. The latter name originated at the time when the name Hessenturm was used and the building was used as a prison for the main and criminal court of the Duchy of Jülich . It is misleading because only a few individual proceedings against so-called witches have come down to us from Jülich .

After the almost complete destruction of Jülich in World War II , the first security measures were carried out on the Hexenturm in 1949/1952, followed by a further restoration phase from 1961 to 1964. The onion domes from the 17th century were faithfully reproduced here. Flat cone helmets were also discussed for the roof reconstruction , with which the rectangular building on the city side with the pointed tent roof would have towered over the towers.

Hexenturm with light installation at night

Since October 29, 2005 the Hexenturm has been illuminated by the donation-financed "LIGHT (!) Project" in the evening and in winter also in the morning with a light installation consisting of 22 lights on both sides. The witch tower forms the beginning of a planned “light trail” through the city center to the citadel .