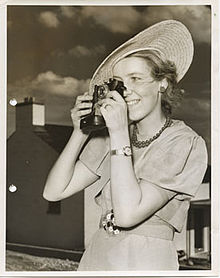 Hillevi Svedberg was the daughter of the Nobel laureate in chemistry The Svedberg and the doctor Andrea Andreen , who is considered a pioneer in sex education in Sweden . After graduating from high school in Stockholm in 1929 , Svedberg began studying architecture at the Royal Technical University , which she graduated from in 1933. She then worked for well-known architects such as Albin Stark and Sven Markelius until 1938 . In 1937 she received a scholarship from the Sverige-Amerika Stiftelsen (Sweden-America Foundation) to study low-cost housing in the United States for a few months . As early as 1934 she began to realize her own projects.

Between 1939 and 1941 Hillevi Svedberg was employed by the National Association of Swedish Architects (SAR). On behalf of the Central Office for Health and Welfare (Socialstyrelsen), she designed several nursing homes in addition to old people's homes, for example in Örebro , Nyköping and Kalmar , as well as buildings for holiday camps.

One of her best-known works, which she created together with Albin Stark, is the YK-Haus in Stockholm's Östermalm district, created in 1939 . That the club of working women given (Yrkeskvinnors Klubb shortly YK) commissioned collective house followed functionalist principles and was tailored to academically educated couples with children. Since it was assumed that both parents were employed, cleaning staff, for whom there was a smaller apartment on each floor, should keep the apartments on the respective floor clean. The house at Furusundsgatan 9 also had a gym , a collective baby changing room and a larger room with access to the terrace and courtyard where children were looked after. A central kitchen and a restaurant should make cooking in your own kitchen superfluous; The meals could be transported to the corresponding floor via a specially designed elevator. Svedberg lived in the skyscraper himself for a time.

Due to a tuberculosis disease and several long stays in sanatoriums , Hillevi Svedberg was restricted in her professional practice. However, she has also emerged as the author of several essays and handbook articles, for example on issues relating to raising children and modern nutrition. She was also involved in the creation of distance learning materials on architecture and furnishings for the Swedish distance school NKI-Skolan . Until her retirement in 1972 she worked for the Central Building Office (Byggnadsstyrelsen), among other things in the editorial office of the agency's magazine Arkitektur .

Hillevi Svedberg was married to the engineer Knut Almström from 1933 to 1959. The marriage resulted in four sons.

Participation in distance learning documents for NKI-skolan (both in Swedish):