The out of the English -derived term hogtie [ hɒgtaɪ ] denotes word as binding an useful animal, especially pig (Engl. Hog ), the (Engl. By tying to tie ) of all legs is prevented from escaping.

However, the actual hogtie restraint on people has always been used in particular to prevent resistance or an escape without causing serious injuries. Ropes are used in the classic design , later chains with massive locking clamps and currently hand and ankle cuffs with a corresponding connecting chain . The word can also 'be approximately translated Krumm Bondage, common next to the English word, the terms Krumm Close or breastfeeding position , rare it is also called immobilization bondage called.

The handcuffed person first lies flat on their stomach, wrists and ankles are tightly tied to one another (the hands behind the back), the hand and ankle cuffs are connected behind their back with another rope or chain, so that the knees are connected are angled orthogonally to a point and the tips of the feet point upwards, the body describes a U or a triangle. In practice, if no special tight anklecuffs are available, the hands are usually first handcuffed with the usual handcuffs, then a pair of equally common ankle cuffs are put on in such a way that their longer connecting chain is led around behind the short connecting chain of the handcuffs and finally the two individual shackles z. B. be tightly locked together with a padlock. The security can be reinforced if the knee joints are also tightly tied, for example with a strap. This type of restraint has a far-reaching effect: the person being handcuffed is practically immobile and can neither move away from the place nor afford any form of resistance or resistance.

This method of restraint is currently often used in the context of the penal system, with poorly behaving prisoners being temporarily immobilized with comparatively little effort. This is currently practiced in this way in the penal system in the USA and also by some local police authorities (see below). The term hobble is also used here , derived from the ankle cuffs of horses . For this purpose, a special ankle cuff is available on the US market (CTS-Thompson Model 9108 XOS Hobble) , which can be used in addition to the handcuffs. This type of restraint is sometimes euphemistically referred to as " Shakira " by the servants , as the physical movements of the prisoners who are bound in this way are essentially limited to hip movements and are thus reminiscent of the popular singer. Such restraint is sometimes maintained without interruption for periods of up to 48 hours.

In the police practice of some countries, this method is used to transport people who are prone to violence or, if several people are arrested, to prevent the first from escaping. It is controversial as deaths from asphyxia (respiratory failure) have become known. Due to the typical prone position, the breathing of the person tied in this way is severely hindered, especially in the case of increased body weight, by pressing the fatty tissue into the abdominal cavity and then squeezing the lungs , which in the case of correspondingly overweight people or after high physical exertion, for example, due to previous escape Can cause shortness of breath and even death.

Hogtie with hand, ankle and thumb cuffs on the big toes 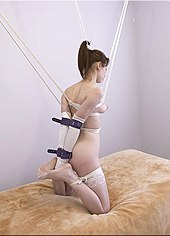 "Vertical" hogtie: The ropes fix the given position.

This restraint allows the active partner to manipulate the erogenous zones , can be used as a "punishment" in an educational game and can give the bottom a feeling of security and calm, but also humiliation, if the patient is appropriately predisposed.

Hogties can cut the ankle in the joints and cause health problems, especially breathing and spine . Safety precautions are common for such activities (see SSC ).