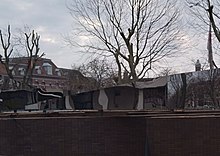 The Holocaust Monument name is the National Holocaust - monument to the Netherlands , which is also the Porajmos dedicated. It commemorates the around 102,000 Jewish victims from the Netherlands who were arrested, deported and mostly murdered in the Auschwitz and Sobibor extermination camps by the Nazi regime during the German occupation of the country (1940–1945) , as well as the 220 victims from the population group of the Roma and Sinti . The monument is in the Weesperstraat in Amsterdam-Centrum - near the former Jewish quarter- and was presented to the public on September 19, 2021 by King Willem-Alexander  and Jacques Grishaver , Chairman of the Nederlands Auschwitz Comité .

The monument was mainly financed by donations. Numerous places paid for the names of their killed Jewish citizens to be affixed. It was designed by the Polish-American architect Daniel Libeskind . The local construction management was the responsibility of the Amsterdam architects Rijnboutt.

The monument is made of brick walls in the shape of four Hebrew letters. They mean «in memory». The text can of course only be read from above. On each brick is the name of a victim, the date of birth and the age at the time of the murder. Visitors can walk around the four letters, the walls form a maze of passages. The walls are closed from above by a steel rim in which trees and clouds are reflected, including the walls below. Almost 80 percent of the families listed by name were completely wiped out by the Nazi regime in the course of the Shoah . “This monument gives the victims their names back 76 years after the end of the war and proves that they lived,” says Jacques Grishaver.

The memorial is part of a series of Holocaust memorials that try to record the names of the victims in different ways, first and foremost the Hall of Names in Yad Vashem, the Mémorial de la Shoah in Paris and the Jewish Museum Thessaloniki , in which on stone the names of the victims of the Shoah in Thessaloniki are engraved. The Walls of Names memorial is currently under construction in Vienna.It will name more than 64,000 murdered Jews in Austria.

The initiative for the memorial came from the Dutch Auschwitz Committee, headed by Jacques Grishaver. It took 76 years since the fall of the Nazi regime until the monument could be completed and opened to the public after years of litigation. Residents had tried to prevent the erection of the monument in court, among other things because it was too big and encouraged the influx of visitors. At the end of 2019, the appeals were rejected in the last instance.

Prime Minister Mark Rutte and Amsterdam Mayor Femke Halsema spoke at the ceremony to mark the handover of the monument . She regretted that the city had not adequately protected the Jewish population from persecution during the German occupation. According to Halsema, around 140,000 Jews were living in the Netherlands in May 1940, 80,000 of them in Amsterdam. Only 15,000 would have survived. These walls, the names carved here in stone, “stand like a fortress between us and oblivion”. Mark Rutte exclaimed:

The prime minister added self-critically that the memorial was forcing the Netherlands to account for the “cold reception” of the few Jews who had survived the extermination camps in the east and had returned. Rutte called this attitude “a black chapter in our history”. Jacques Grishaver characterizes the function of the monument - a memorial for relatives, a place of enlightenment for young people: “The unbelievable number of 102,000 can now be seen.” Christoph Heubner , Executive Vice-President of the International Auschwitz Committee , praised the perseverance and determination of the initiators: "The decades-long struggle against indifference and pushing history aside has paid off."