The title of this article is ambiguous. Further meanings are listed under Hrvatska stranka prava (disambiguation) .

The Hrvatska stranka prava (Croatian Right Party), or HSP for short , is a party in Croatia classified as national-conservative, right-wing extremist , fascist or neo-fascist or extremely nationalist .

The party was only of greater importance during the times of the Austro-Hungarian monarchy. Both in Yugoslavia before the Second World War and in the democratic multi-party system of today's Croatia, the HSP was or is a minor splinter party on the right edge of the political spectrum.

Historically, the HSP refers to a party of the same name founded by Ante Starčević and Eugen Kvaternik in 1861 , but the lines of communication between the two groups are barely discernible. The original goal of Starčević's and Kvaternik's party was the extensive political independence of Croatia, which was to become a constitutional monarchy linked only through a personal union with Austria-Hungary . The rights in the name of the party meant the traditional rights of the Croatian estates, which the Party of Justice interpreted as the rights of the entire Croatian nation that were disregarded by the Austrian and Hungarian governments, and which they regarded as the basis of the state independence it required looked at.

The previous party was reorganized by Starčević in 1871 after several bans and participation in the unsuccessful Rakovica revolt . In the 1880s, the Right Party became the main opposition party in Sabor, Croatia . Since the 1890s there have been several splits in the party, which, in addition to other ideological and personal disputes, were sparked primarily by the dispute over the question of the political constellation in which Croatia could best achieve the greatest possible independence. Some considered a reform of the Austro-Hungarian monarchy to be hopeless and therefore advocated an alliance of all peoples oppressed by it against them, within the framework of which the Croats should also work with Serbs and Slovenes , and thus came closer to the Yugoslav- oriented groups. The others wanted to achieve an independent Croatia within the Austro-Hungarian monarchy through the closest possible cooperation with the crown and therefore also supported Austria's imperialist foreign policy in south-eastern Europe. 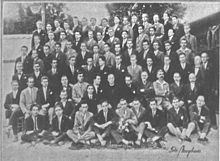 In the Kingdom of Serbs, Croats and Slovenes that was established in 1918 , the pro-Yugoslav successor parties of the former HSP merged into the Yugoslav federalist bourgeois parties, while the anti-Yugoslav groups once again adopted the name HSP without any further additions and as a radical opposition to the Serbian hegemonism in the common state fought. However, compared to the Croatian Peasants' Party, which dominated Croatia's political life at the time, the HSP only gained limited importance. At the beginning of the royal dictatorship in 1929, the HSP was banned like all political parties in Yugoslavia. Led by Ante Pavelić militant wing of the party organized after the ban underground fascist Ustasha movement, which during the Second World War, the 1941-1945 Independent State of Croatia ruled. When a one-party state was established by the Communist Party of Yugoslavia after the Second World War , the Ustaša movement and the establishment or re-establishment of any kind of party were forbidden, although various successor organizations continued to exist in exile .

At the beginning of the 1990s, today's HSP was founded by the then main figure of Croatian neo-fascism Dobroslav Paraga . It had been represented in the Croatian town of Sabor since the first free parliamentary elections in 1990 , but was numerically limited in importance. The party was then oriented extremely nationalistic and established open to the ideology of the Ustasha -Faschisten on.

During the Croatian War , the HSP was involved in the establishment of the paramilitary "Croatian Defense Forces" ( Hrvatske obrambene snage , HOS ), which Tudjman integrated into the Croatian army in November 1991 . In this combat group were mercenaries from all over Europe, u. a. organized by German and Austrian right-wing extremists. With their abbreviation HOS and their appearance, they reminded of the official name of the regular armed forces of the Ustasha state, Hrvatske oružane snage, which was valid from 1944 . The ruling Hrvatska demokratska zajednica worked with the HSP until the fall of Vukovar , after which the leaders of the HSP and HOS were temporarily detained on charges of terrorist activities. At this time, Dobroslav Paraga , one of the founders of the new HSP, split off from the party faction around Anto Đapić , and in 1995 founded the "HSP 1861".

In the parliamentary elections in 2007, the party lost massive votes and from 2007 to 2011 was only represented with one seat in the Sabor. Daniel Srb has been party chairman since 2009 .

In 2011 the party also lost its last seat. Another HSP spin-off, Hrvatska stranka prava dr. Ante Starčević , moved into the Sabor with a deputy ( Ruža Tomašić ).

With Mirko Duspara, the "original" HSP has provided the mayor of Slavonski Brod since 2005 .

Parties in the Croatian Parliament