The ice hockey rules are (Engl. The official rule book Rulebook ) of the International Ice Hockey Federation (IIHF), which hosts the international tournaments, committed. The rules apply for 4 years (currently from 2014 to 2018) and will be updated for the 2019 season. There are a total of six sections in this rulebook that describe the topics of the field , teams, players and their equipment , officials and their duties , rules of the game , penalties and special rules .

In the NHL there are some deviations from the regulations of the IIHF. There is a separate rule book here, which also has six sections, but some of them have different content.

The following is an overview of the international rules according to the IIHF:

The playing field is a rectangular ice surface with a length of 56 to 61 m and a width of 26 to 30 m, the corners are rounded with a radius of 7.00 to 8.50 m (Rule 101). For official IIHF championships, the length must be between 60 and 61 m and the width between 29 and 30 m. The playing field is surrounded by an approx. 1.20 m high board, on which glazing (acrylic, polycarbonate or plexiglass) is (usually) placed to protect the spectators and an additional safety net is attached behind the goals. The goals are 122 cm high and 183 cm wide, the goal posts are colored red. A semicircular goal area is marked around the goal.

The playing field is divided in length by 5 lines (Rule 110): by two 30 cm wide blue lines into 3 zones of equal size: the attack zone , the neutral zone and the defense zone (Rule 112). The neutral zone is halved by the red center line , which is also 30 cm wide ; in the middle of it is - in the center of the playing field - the allusion point within the allusion circle (also called face-off circle ). There are a total of five face-off circles, each with a radius of 4.5 m, the one in the middle of the field and two each in the defense zones. As the 4th and 5th cross lines, the goal lines are drawn across the entire field (red, width: 5 cm). The players' benches are located on one side outside the longitudinal borders of the neutral zone and the timing and penalty benches are on the opposite side. In contrast to many other field sports, the playing field extends around the goals. The playing field is usually surrounded with wooden or plastic walls. Since the rule changes for the 2014–2018 period, international ice hockey has moved closer to the American NHL. International games can now take place on the playing areas, which are up to 4 meters shorter. In the NHL, the playing field is usually only approx. 26 m wide and 56 m long and has a different distribution of the playing field zones. Thus, the game in North America is usually a bit faster and more aggressive than in Europe.

Players on the ice surface (rule 400)

However, it is also possible to deviate from this scheme, especially in under- or over-number situations.

Until about 1930 there was a sixth field player in the "rover" position.

As a rule, the game is played in rows or blocks - this means that the striker and defender always play with the same partners. An optimally staffed team has four lines of defense (4 × 2 + 2 players = 10 players) and four lines of attack (4 × 3 players = 12 players). This results in: 1 goalkeeper + 10 defenders + 12 strikers + 2 substitute goalkeepers = 25 players. In the respective game / tournament, however, the number of registered players may only be 22.

A team must designate a captain and two assistants. To identify them, they have a "C" (Captain) or "A" (Assistant) on their chest. Until the 1990s , the players of the Russian / Soviet teams alternatively wore a Cyrillic "К" for the captain. Today this would still be permissible, but is only rarely used.

The captain or his two assistants are the only ones to ask the referee about the interpretation of the rules in the event of ambiguities or wrong decisions by the referee.

The substitution of field players is not only possible during game interruptions, but can also be done "on the fly". Usually the teams change every 40 to 100 seconds.

Comprehensive protective equipment is mandatory to prevent injuries . In addition to a special ice hockey skate (221) and the stick ( stick ; 222), this includes a helmet (223) with a helmet visor (not mandatory in the NHL) (224), gloves, neck and larynx protection as well as mouth and tooth protection (can be omitted from the age of 18). There is also shoulder and chest protection. Since the goalkeepers are exposed to an increased risk from shots fired at them, they have special equipment: in addition to special goalkeeper skates (231) and a special stick (232), they wear a helmet with a face mask (234), leg guards (235) and a blocking glove with protective plate (stick glove ; 233a) and a catch glove (233b). 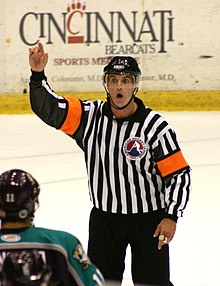 Referee in the AHL

The referees are among the officials. These are divided into game officials and off-ice officials . The game official consist of two referees ( referees ) and two linesmen ( linesmen ). They wear black pants and black and white striped jerseys. The (main) referees also have a red stripe on both upper arms to distinguish them. The referees have general oversight of the game as well as control over the players and officials (312). The linesmen have control over line violations (offside and icing; see rules), take over the face-offs / throw-ins and support the referees (313). Referees and linesmen have a much greater influence in ice hockey than in football, for example . You can directly influence the game by issuing bank fines.
In addition to the stadium announcer and the game timekeeper, the off-ice officials include a judge (possibly with assistants), a video gate judge who can be consulted in the event of disputed decisions, two penalty box supervisors and two gate judges who are directly behind the Sit on the goal and activate a red lamp when the puck has completely crossed the goal line. One of the main referees decides whether the hit was scored regularly. Gate judges were only used in play-off games in the DEL ; since the 05/06 season there are no more goal judges in the play-offs and the video goal judge is taken over by the stand-by referee.

An ice hockey game lasts 60 minutes net (effective playing time) (3 thirds of 20 minutes each). Since the clock is stopped every time the game is interrupted, an ice hockey game usually lasts considerably longer, on average between 30 and 40 minutes per third. There are 15-, 18- or 20-minute breaks between the thirds. A normal ice hockey game therefore lasts around two and a half hours. If the game is tied after the regular playing time, the game will be decided either in overtime ( sudden death ) or in a penalty shoot-out, unless otherwise stipulated in the rules for the relevant league . More on this under Overtime .

It is permissible to use the skate to move the puck, unless a goal is scored by kicking it directly. Playing the puck with a high stick (stick above "normal" shoulder height) is not permitted - but it is permitted to stop the puck with your hand. Hand passes and goals scored by hand passes are prohibited. The exception is the hand pass in one's own defensive third. A pass can also be given by hand, as long as the puck is also accepted in the defensive third.

Line-up to face-off at the start of the game

A player ( Alexander Sasonow ) in the penalty box

Penalties are issued by the referee for the following behavior, among other things:

Handicap ; Tripping (tripping); High sticking; Hook (hooking); Attack against the knee (kneeing); Game delay (delay of game, for example deliberately moving the goal); incorrect equipment (for example, playing without a helmet (not in the NHL) or playing with a broken stick); Slashing (slashing); Stick stitch (spearing); Butt- (butt-ending); Gang check (boarding); Cross check (also stock check); Check from behind (checking from behind); Check against the head (checking to the head); Elbowing (elbowing); too many players on the ice (too many men on ice); Unfair behavior (for example, swallows , unsportsmanlike conduct); Excessive hardness (roughing); Unauthorized physical attack (charging); Referee criticism (misconduct); Hold . In the case of women, a small penalty is also pronounced for a body check (illegal hit).

The small , large and disciplinary is served by the player in the penalty box, was pronounced against the punishment. This usually creates a 5 against 4 game situation (power play). Disciplinary and match penalties are usually imposed in combination with a small or large penalty (for example 2 min + 10 misconduct penalty). In this case, a second player must be named to serve the minor or major penalty in parallel. Once this penalty has expired, the team on the ice can play again in full, but must forego the punished player until the disciplinary penalty has expired.

If the team playing in the majority succeeds in scoring a goal, the player is allowed to go back onto the ice immediately (provided he has served a small penalty). A goal has no influence on major penalties or disciplinary penalties. If two players sit on the penalty bench, the one whose penalty has the shorter remaining time can go back onto the ice.

The penalties are served on the penalty bench (except penalty). The goalkeeper is an exception: he never goes to the penalty box, but is represented in the case of minor penalties or the first disciplinary penalty by a player to be designated by the captain or coach or coach who was on the ice at the time of the offense. In the event of a Major or Second Misconduct penalty, the goalkeeper is immediately excluded from the rest of the game.

A player who receives the second game misconduct penalty in an ongoing championship or tournament can be banned from the next championship or tournament game, depending on the regulations. A match penalty results in at least one suspension for the next game, depending on the regulations and the assessment of the offense by the competent authority, the suspension can be extended to several games.

If the same number of penalties is pronounced against both teams at the same time, the players concerned must serve the penalty in the penalty box, but the two teams remain on the field in the same strength as before the offense. The only exception: Both teams play at full strength and both teams receive exactly one small penalty each - in this case, the game continues with four against four field players. A team can never be reduced to fewer than three field players by penalties.

In the case of the third penalty (thirds 1, 2 or 3), which would result in a man less on the ice, the player concerned has to go to the penalty bench, but the penalty time does not start until a previously penalized player has expired (suspended sentence).

If only 4 against 4 players are played in overtime, in the case of the second penalty, which would result in a man less on the ice, the penalized player does not take the penalty in the penalty box. Since a team may never be reduced to fewer than 3 field players, the team that has not been penalized brings another player into play - it continues with 5 against 3 players. After the penalties have expired, the number of field players is brought back to 4 at the next interruption.