Beasley came to Sydney with his family as a child , attended a Catholic school and became an electrician after graduating from school . He worked in the city administration of Sydney and became president of the union Electrical Trades Union (ETU) and from 1922 to 1928 he was president of the Trades and Labor Council of New South Wales and in the time of the party chairman of the CPA John Garden , he joined the party one that he soon left and joined the Australian Labor Party (ALP). 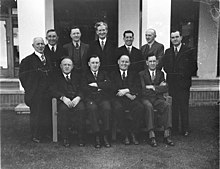 In 1928 Beasley was elected to the Constituency Division of West Sydney . When the federal ALP under Jim Scullin won the national election in 1929, he became a minister at special disposal with no specific area of ​​responsibility. He left this position in 1931 in response to Scullin's economic policies during the Great Depression . He then became the campaign manager for Jack Lang and when he left the federal ALP, he succeeded and became the leader of a political splinter group, the Labor Lang Party.

In 1941 Curtin led this group back into the federal ALP, except for Jack Lang. When Curtin became Prime Minister in October 1941, he named Beasley Secretary of Defense and later entrusted him with Secretary of State for Transportation during World War II . When Curtin died in July 1945, his successor Ben Chifley appointed him Secretary of Defense and after the war he was transferred to London as High Commissioner , as Chifley was not taken with Beasley's past political behavior. Beasley held this post until his death.