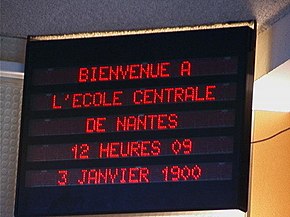 Millennium error on a scoreboard in Nantes , taken on January 3, 2000

The year 2000 problem , also known as the millennium bug (in German “Millennium error”) or Y2K bug (from English year 2 kilos = ' year 2000 '), is a computer problem that is essentially through the treatment of years as a two-digit specification within computer systems.

In the 1960s and 1970s, storage space was scarce and expensive. For example, punch cards could only store 80 digits, computers had RAM with e.g. B. 64  KiB (= 64 * 1024 bytes) size. Programmers therefore saved as much memory as possible. Often only the last two digits (year and decade, for example in the format "DDMMYY" or similar) were used to store and process years (in decimal notation), for example by the computer pioneer Grace Hopper when developing COBOL . The problem concerned operating systems , user programs and databases . The first two digits (indicating the century) were not taken into account and no consideration was given to whether or not the programs would be used in this way beyond the current century. Many programs (and the associated data sets) have been expanded over the years, building on previous versions, without this "known deficiency" having been corrected. The closer the turn of the century came, the more it became clear that these programs could not correctly process the year 00 and the following in many cases; For example, when comparing two year numbers (e.g. with values> = 00 against values ​​<= 99) the former would be treated as smaller (i.e. earlier).

Without corrections, the consequences of these errors would have been, for example, incorrect sorting : data for (20) 00 at the very front, ..., (19) 98, (19) 99 at the very back. Above all, the incorrect calculation of the duration (as the difference between two times) would have led to serious errors in numerous functions. Examples: Age calculation with '−40 years' (= year_today (00 ...) minus year of birth (40)); Arrears in payment are not recognized (date today minus the date of payment due results in a negative number of days, reminders only from arrears 30 days and more, thus "no reminder"); Debit interest on savings or interest credit for loan interest (due to negative number of days in the interest formula ) and many others.

Furthermore, it was widespread practice to represent and identify nonexistent or invalid data content with the number or combination of digits 00 (" nothing ") - which would have led to misinterpretations with the arrival of the year 2000, possibly even to the non-processing of whole, supposedly invalid records. Furthermore, there would be incorrect generation of texts (a typical example would be a date with the year “1901” or “19101” for the year 2001).

In the case of PCs that were older at the time, the internal real-time clock could not automatically switch the century, which was not automatically corrected by the BIOS , MS-DOS or Windows 98 . Specifically computer-controlled hardware components (so-called. Embedded Systems (English) embedded systems , eg. In alarm systems, video recorders, machine tools ...) could present problems, since the user is not simply the software could be reprogrammed, but the manufacturer (if still available) or even had to replace the hardware.

Since there were various strategies to circumvent the year 2000 problem (example: a year greater than 50 is considered 19xx, otherwise 20xx for less long-term periods; converting data fields to four-digit years or other date formats), the users had to plan exactly in which contexts which of these strategies was to be used. Since there were many programs that processed a large amount of data, it had to be ensured that changed programs always required correspondingly changed data. Difficulties arose in this context for historical data stocks: Here it had to be decided whether these should also be adapted or whether they still had to be processed using old (unchanged) program versions.

In addition to other challenges, companies were sometimes faced with the situation of not knowing which programs and which devices process dates at all or are then Y2K-capable. This could lead to extensive survey and test measures , which usually caused significantly more effort than correcting faulty software. Nevertheless, the fixed dates had to be adhered to with absolute certainty , because the “1. January 2000 ”could not be postponed and many applications (those that were calculated in the future) had to be“ Y2K-ready ”at earlier dates.

Course of the change to the year 2000

Because of these problems, disaster scenarios were predicted in the run-up to the turn of the year 1999/2000 that this error would lead to large-scale computer crashes. To what extent the Y2K problem would be of real relevance could hardly be assessed realistically at the end of the 1990s.

There were voices in the media predicting apocalyptic scenarios with global computer breakdowns. Accordingly, particularly security-relevant areas that rely on computers (banks, industry or even power plants, in the extreme case of the predictions even nuclear weapons ) should be affected by the problem, or even paralyzed by the problem. Many scenarios were cited as consequences, from traffic chaos to a stock market crash and a global economic crisis to the false triggering of nuclear weapons systems - even plane crashes, although time errors had long been part of the certification procedures for safety-critical software at this point.

In practically all large companies, a detailed examination of the computer systems with the help of diagnostic procedures was ordered in order to keep the feared consequences as low as possible. Warning stickers were also distributed for devices that were systematically taken out of service by the end of 1999.

The software industry reacted by checking its products and issuing warning lists indicating which programs could malfunction. These were combined with test routines for the hardware (especially the system clocks).

Private users found lists of endangered hardware and software on the Internet.

While some media had distributed worried reports until the critical turn of the year 1999/2000, it turned out at the beginning of 2000 that the precautionary measures had been by and large sufficient: In many projects around the world, programs and databases (especially on mainframes) " redeveloped ”to eliminate the“ Y2K error ”. Nevertheless, many banks simply turned off their ATMs on New Year's Eve to avoid mistakes.

None of the known Year 2000 issues had a major impact. They were also sparse in countries that had invested little in correcting the problem. Here are some examples:

The costs associated with the year 2000 problem were significant: for example, the Massachusetts Institute of Technology estimated that the US Medicare program alone had to spend $ 500 million to fix the bug. The total cost of the Y2K projects was estimated by Gartner at "up to 600 billion US dollars" worldwide, in large companies the costs for measures to check and convert the applications reached two- to three-digit million amounts (euros).

With the hardware and software updates that were made to prevent the Y2K problem, many users were equipped with the latest platforms in 2000. This triggered a slump in sales of new systems and a noticeable recession in the IT sector in the following four-year period (service life of a common office device).

Year 2010 problem
At the turn of the year 2009/2010, some of the scenarios prophesied here occurred unexpectedly. Credit cards and debit cards were no longer recognized as valid and SMS messages were outdated. Flawless e-mails were mistakenly treated as spam in large numbers.
Year 2027 problem
On January 1, 2027, the bits in the data format of the calendar on the computers of the 3000 series from Hewlett-Packard will be used up. This is an old system of medium-sized data technology , for which the manufacturer has no longer been supported since December 2015.
Year 2038 problem
Similar problems could arise on January 19, 2038 and lead to software failures in IT systems. However, this problem is likely to be limited to IT systems that use Unix time as the time standard. The reason for this is that in the year 2038 the signed 32-bit integer used is no longer sufficient for the time display and thus an arithmetic overflow occurs.
GPS week
The weekly counting of the GPS time signal began in 1980 at zero and uses 10 bits, which corresponds to 1023 weeks or approx. 20 years. Then the counter jumps back to zero. During the first overflow in 1999, there were also fears that this might not go smoothly with all GPS receivers. The second overflow took place on April 7, 2019 at 01:59:42 AM CEST.