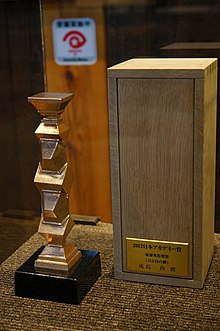 The Japanese Academy Award (Japanese: 日本 ア カ デ ミ ー 賞 , nippon akademī shō ; English: Japan Academy Film Prize ) is the most important film award in Japanese film art. Since 1978, outstanding achievements in the field of film have been honored annually in Tokyo . It is thus much younger than the Kinema Jumpō Prize . In contrast to many other award ceremonies, the Japanese Academy Awards do not take place on a fixed date, only the period between February and April is fixed.

The categories are similar to those of the US Academy Awards . The films from the previous year will be awarded at the award ceremony. The winners will be selected from among the recipients of the Outstanding Achievement Award.

Some critics view the Japanese Academy Awards as a popularity contest rather than an award for excellent films. For example, the internationally acclaimed and award-winning film Nobody Knows (2004) received only one nomination in the Best Supporting Actress category .