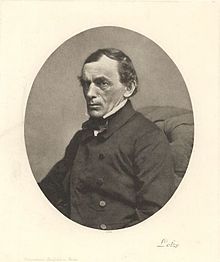 Lotze was born as the third child of a military doctor in Bautzen . He attended the high school in Zittau . In Zittau he later worked as a general practitioner for a year. He studied at the University of Leipzig philosophy and was there to Dr. phil. PhD. He completed his habilitation in medicine in 1839 and philosophy in 1840. In 1843 he was appointed associate professor for philosophy. In 1844 he was appointed to the Göttingen chair as the successor to Johann Friedrich Herbart . His most important works fall during this period. Parts of his older work, especially his system of philosophy, are connected to Berlin , where he was called in 1880, but where he also died a short time later (1881). Josiah Royce and Hermann Langenbeck are among his students .

Lotze's grave in the Albani cemetery in Göttingen

During his time and until before the First World War , Lotze was considered the most important German metaphysician after Georg Wilhelm Friedrich Hegel and a pioneering natural scientist. As a philosopher, Lotze received suggestions from Johann Friedrich Herbart and Christian Hermann Weisse , but felt (as he himself said) most attracted to Leibniz . As a physiologist, he rejected (uncritical) vitalism in his 1843 treatise Life and Life Force . Lotze described his scientific standpoint as teleological idealism, in that metaphysics did not begin in itself, but rather in ethics .

Lotze embodied both scientific and philosophical competence to a high degree. He always tried to reconcile very heterogeneous interests. In his youth he combined his enthusiasm for science with his love for poetry; a volume of poetry published by him was judged negatively by critics. Later he dealt with the tension between science and speculation and also between logic and metaphysics. Furthermore, he tried to convey mechanism and teleology . His late work is characterized by a system experiment in which Lotze was concerned with the unity of different philosophical disciplines.

Lotze is less well known today. More recently, however, parts of his work have been given a somewhat higher level of appreciation. His great influence on the scientific and philosophical discussion of his time not only in Germany is undisputed. The English neo-Hegelianism was influenced by him as well as Ritschl and the Ritschlians or American pragmatism. In Germany, representatives of Neo-Kantianism appealed to him , among other things, he also influenced phenomenology and the Dilthey school . He also introduced the terms “ validity ” and “ value ” into the philosophical discussion. He distinguished between the three realms of reality, truth and values. His medical studies were pioneering work in the field of scientific psychology . He also made important contributions in the field of aesthetics and its history.

Since Bruno Bauch , attention has repeatedly been drawn to the possible connection between Lotze's logic and central pieces of Gottlob Frege's philosophy . The antipsychologism of validity theory and individual utterances are mentioned as common features, especially Lotse's claim that mathematics can be justified from logic.