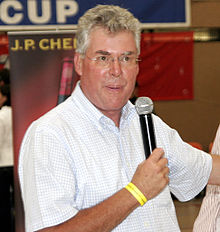 Johann Krieger at the Schlecker Cup 2007

After completing his law studies, which he completed in Freiburg, Würzburg and Berlin , Krieger initially worked as an administrative judge in Sigmaringen . In 1986 he was elected Lord Mayor of Ehingen. He was confirmed in office twice (1994, 2002).

On June 3, 2010, after the traditional big tattoo of the Ehingen citizen guard on the Ehingen market square, he announced that he would no longer run for the mayor elections in autumn 2010.

Krieger has been a member of the Corps Hubertia Freiburg since 1968 .