Journal for pure and applied mathematics 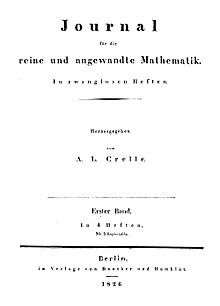 The Journal for Pure and Applied Mathematics , or Crelles Journal for short , is one of the most renowned mathematical journals . It was founded in Berlin in 1826, making it the oldest periodical in the field of mathematics that still exists today .

The journal's impact factor in 2012 was 1.083. In the statistics of the Science Citation Index , the journal was ranked 32nd out of 295 journals in the "Mathematics" category.

August Leopold Crelle planned the Journal in 1828 as a series of quarterly publications, four of which were to be combined into one volume. The actual frequency of the issues was higher from 1830; The 100th volume was already published in 1887, the 200th in 1958. In the mid-1960s, the division into booklets was abandoned; the volumes were now published quarterly, from the 1980s onwards monthly. The first volume was published by Duncker & Humblot in Berlin, the following by Georg Reimer Verlag , also based in Berlin, which was published by Walter de Gruyter at the end of 1918 .

According to Crelle's original idea, the subject area should be relatively broad. In his preface to the first volume he writes:

"The scope of their objects should include:

Soon, however, there was a focus on mathematical topics. Although work in the field of physics still had a permanent place in the 19th century - among others, articles by Georg Simon Ohm , Ludwig Boltzmann and Hermann von Helmholtz  - but from around the turn of the century the journal had become a purely mathematical journal.

After Crelle's death in 1855, the journal was initially continued by respected professors from Berlin University , and from the beginning of the 20th century also by professors from other universities.

Since the late 1970s, it has been edited by an international committee of around five to eight renowned mathematicians. The current (2013) managing editor is Rainer Weissauer , and the editorial board also includes Tobias Colding , Joachim Cuntz , Daniel Huybrechts and Jun-Muk Hwang .