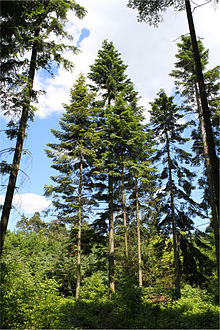 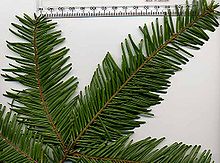 Branch of the silver fir

Distribution map of the coastal fir with the two varieties

The coastal fir is native to western North America. Its distribution area extends along the Pacific coast from Vancouver Island and from British Columbia via Washington and Oregon to northwestern California . Separated from it, it also occurs inland east to Idaho and west Montana .

The coastal fir rises to an altitude of 1600 meters. It prefers deep, nutrient-rich, moist but well-drained soils. It often grows along rivers. It forms pure stands or mixed forests with the Douglas fir , the West American larch , the Sitka spruce and the West American hemlock .

In Central Europe , the coastal fir is one of the most important foreign wood species in terms of forestry, especially in the Atlantic climate area. On the one hand, it is very fast-growing: from the age of five it forms annual shoots up to one meter in length and accordingly increases its trunk diameter quickly. It can reach a height of 40 meters and a diameter of 50 centimeters within 50 years. On the other hand, it is more tolerant of the location than the silver fir . However, there is a susceptibility to root pathogenic fungi such as Armillaria .

The coastal fir is an evergreen tree that reaches heights of up to 85 meters and trunk diameters ( BHD ) of usually 1.55, rarely up to 2.5 meters. Their maximum age is 300 years. The canopy remains to old age, unlike the white fir or Colorado spruce , always pointed cone - the flat, round "Stork crown" is extremely rare. Another characteristic of the coastal fir, in contrast to the European red spruce , is a very solid or not very woody trunk. In young trees, the bark is brownish-gray with resin bubbles and remains smooth for a long time even with a total height of over 30 meters. The bark in the lower third of the trunk of old trees is dull-gray to purple-gray and breaks into small fields.

The dark purple, resin-bonded buds are very small at 2 mm and hidden under the needles. The needles are parted very flat and arranged in two levels. The top row is 1.6 to 3 centimeters shorter than the lower row, 2.5 to 5.5 centimeters. The needles smell of oranges when grated.

The flowering time of the coastal fir is from April to May. The coastal fir is single-sexed ( monoecious ). The male cones are bluish-red, purple, orange, yellow or green. The female cones are light green, dark blue or dark purple in color during the flowering period. The ripening, cylindrical cones have a length of 5 to 12 centimeters and a diameter of 3 to 3.5 centimeters; they are light green or gray at first and red-brown when ripe. The 6 to 8 × 3 to 4 millimeter large seeds ripen in September and have a wing that is about one and a half times as long as the seed. The seedlings usually have five to six (four to seven) cotyledons ( cotyledons ).

Similar to spruce wood , the wood of the coastal fir is rather soft and is therefore often used for paper production, for transport boxes and as construction timber.

The silvicultural treatment is decisive for the quality of the wood .