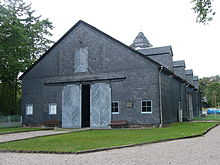 Barn as the main building

The Laura subcamp was a subcamp of the Buchenwald concentration camp near Lehesten . The remains of the camp are now a cultural monument and form a memorial for victims of National Socialism .

In the course of the Second World War, the armaments industry was relocated to underground production facilities to protect against bombing attacks . One of them was in Lehesten under the code name Vorwerk Mitte Lehesten . The engines of the V2 rocket were tested here. The concentration camp was set up in 1943 near Schmiedebach in the so-called Happy Valley . The main building was a large barn from 1929 that housed up to 800 people. The living and working conditions were inhumane just because of the narrowness. A small barn was converted into a prisoner's kitchen, and the former stables served as detention bunkers. From October 1943 to the end of June 1944, around 170 Italian soldiers were interned in an old slate splitting hut, which was also used as a "punishment block".

When the camp was set up, SS-Obersturmbannführer Wolfgang Plaul was the camp commandant and SS-Oberscharführer Karl Schmidt was the camp leader.

Of the 2,600 prisoners, mainly from the Soviet Union, Poland, France, Italy, Belgium and the Netherlands, at least 550 died. The SS transported the prisoners to the Dachau concentration camp on April 13, 1945 , and the inmates who stayed behind were liberated by the Allies on the same day. Offenders were convicted a. in the Buchenwald secondary processes .

In 1956 a memorial stone was erected on the former concentration camp site, and since 1979 part of the centrally located barn has been used as a memorial. Since 1985 a stele on the outskirts of Wurzbach in the direction of Bad Lobenstein has been commemorating a death march in spring 1945. Two former prisoners are buried in the Neundorf cemetery. The entire area of ​​the former concentration camp is now part of the memorial and has been redeveloped since 2011 by the Saalfeld-Rudolstadt district as the sponsor and owner of the property with funding from the Thuringian Ministry of Education, Science and Culture . The Friends of the KZ-Gedenkstätte Laura eV also contribute to the preservation .