Emblem of the Chamber of Technology

The Chamber of Technology (KdT) was an organization founded by the FDGB in the SBZ in 1946 , whose task it was to bring together the engineers , technicians and scientists in technical activities. The KdT corresponded on a technical level with the Association of German Engineers (VDI), which was re-established in West Germany, and was able to maintain a certain degree of independence from the SED within the scope of its possibilities . Therefore, after the reunification, the KdT was classified as “party members”. It offered the engineers, technicians and business administrators the opportunity to work together across all the limits set by the planning bureaucracy and to exchange experiences internationally.

The headquarters were in the former Dorotheenblock on Ebertstrasse in Berlin . The office block was built from 1912 to 1914 as the headquarters for and by the VDI.

Badly damaged in the war and rebuilt by the members of the KdT through voluntary joint work, it was used by the KdT Presidium until the Federal Government moved. Today the building is integrated into the Jakob-Kaiser-Haus . 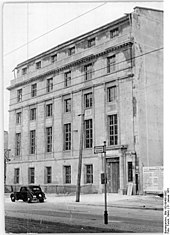 Former seat of the presidium of the KdT, 1951. Today as house 5 with the natural stone mosaic by Charles Crodel (1951/1952) part of the Jakob-Kaiser-House

The KdT was an independent and equal member of ten international organizations in various fields and a founding member of the World Federation of Engineering Organizations . Naturally, particularly close relations existed with the engineering associations of the socialist states. The KdT maintained one of the largest scientific and technical libraries in the GDR.

The KdT was structured according to the principles of democratic centralism . The highest organ was the Congress, which was composed of the delegates from the individual branches. Scientific and technical societies (WTG), the professional associations (FV) and the district associations (BV) are subordinate to the Presidium.

The smallest organizational units of the KdT were the "operating sections", of which there were around 2,800 at the end of 1989. The 15 district organizations were subdivided into 12 central specialist associations, to which several hundred specialist committees, specialist sub-committees and regional working groups were affiliated. At the end of the 1980s, the KdT had around 300,000 members.

She owned her own publishing house, which u. a. published the monthly magazine “ Technische Gemeinschaft ” (organ of the executive committee of the KdT) for the members . The journal was published from 1953 to August 1990 ( ISSN  0492-5041 ). The membership fees were collected by the postal newspaper sales company that delivered the magazine and passed on to the association.

The KdT was also the publisher of 26 technical journals.

The Society for Standardization in the Chamber of Technology was a WTG of the KdT for the promotion of standardization and quality assurance and improvement with its seat in Berlin.

The tasks of the KdT were named:

The presidents of the Chamber of Technology were:

The KdT was able to appreciate special engineering services through:

Dissolution after the turn

The attempts to restructure the KdT as a general association from 1990 or to integrate it into the Association of German Engineers failed. The engineering association KdT e. V. and its subsidiaries were dissolved at the end of 1995.

The professional association “Aviation” of the KdT announced in March 1991 that it would join the “Lilienthal-Oberth-Gesellschaft”, which was in preparation at that time, with effect from January 1, 1992. Since there was still a need for internal coordination between the companies involved, the official one was delayed Foundation of the joint association. As a result of the discussion, the “Deutsche Gesellschaft für Luft- und Raumfahrt e. V. "(DGLR), the" Hermann Oberth Society e. V. ”(HOG), the“ Society for Space Research and Space Travel ”(GWR) and the“ Fachverband Luftfahrt der KDT ”(FVLF) became the“ German Aerospace Society - Lilienthal-Oberth e. V. "

The Microelectronic Center in Frankfurt (Oder) , which opened in 1985 as a training center for microelectronics and has been operating as KDT Fortbildungs- und Umschulungs-GmbH since 1991 and has branches in Schwedt, Potsdam, Cottbus, Neubrandenburg, Rostock, Erfurt, Strausberg and Müllrose, uses names and Emblem of the KdT to this day.