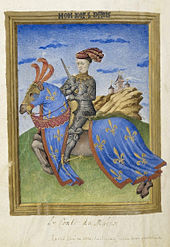 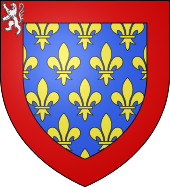 Coat of arms of Charles IV of Maine

He sought to get back the county of Guise, which had belonged to his father and then to his brother René I , Duke of Anjou, before it was conquered by John of Luxembourg in 1425. He began by complaining about Guise to the king, who took it from Ludwig of Luxembourg , Jean's nephew, and in 1443 married Isabella of Luxembourg, Ludwig's sister, in 1443, before getting the county back the following year. From this second marriage comes a daughter, Louise of Anjou (1445–1477), who married Jacques d'Armagnac , Duke of Nemours .

After the death of Charles VII, he joined his cousin Louis XI. who entrusted him with the settlement of the conflict with the Duke of Brittany ; but his efforts only deepened the rifts between the two parties. His attitude during the Ligue du Bien public (1465) was ambiguous - his family and friendly relationships with most of the princes of the league led to a careless defensive battle. When he took part in the Battle of Montlhéry in 1465 , in which he abandoned the king and fled, he was only punished by withdrawing the favor of the king because he was interested in Karl's older brother, the "good king" René , not to be upset.