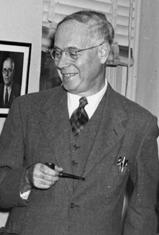 Karl Lark-Horovitz (born July 20, 1892 in Vienna , † April 14, 1958 in West Lafayette , Indiana) was an American physicist and pioneer in semiconductor research . He was a professor at Purdue University .

His original name was Horovitz and after his marriage to Betty Lark in 1926, he added his wife's last name (Lark) to his name.

His father Moritz Horovitz was a well-known dermatologist in Vienna and Lark-Horvitz attended the humanistic grammar school there. From 1911 he studied chemistry in Vienna, followed by physics, interrupted by military service in the intelligence service in the First World War, in which he was wounded. In 1919 he received his doctorate in physics, initially stayed at the University of Vienna and received a Rockefeller grant in 1925, with which he went to Toronto, to the University of Chicago, the Rockefeller Institute in New York and Stanford University.

From 1929 he was a professor at Purdue University, where he built up the rudimentary physics faculty and introduced it to current research, initially nuclear physics. After two years he headed the physics faculty and led it with authoritarian rigor. At the same time he was also known for his lectures and in 1935 received an award from the American Association of Physics Teachers. The later Nobel Prize winner Edward Mills Purcell studied here and Horovitz brought Julian Schwinger and Cornelius Lanczos to the university as theorists (later Victor Weisskopf and Lothar Nordheim as visiting professors) and physicists such as Karl Wilhelm Meissner and invited famous physicists such as Robert Oppenheimer , Emilio Segrè and Wolfgang Pauli to give guest lectures.

In the 1940s he concentrated on solid-state physics and, together with his colleagues, developed semiconductor diodes for use in radar ( tip diode ) and discovered the suitability of germanium as a semiconductor material. The transition to germanium was mainly motivated by the fact that it was easier to manufacture in pure form - the importance of small impurities (doping) in semiconductor materials was recognized very early at the time. Lark-Horovitz also benefited from his experience as a chemist and established contacts with the Eagle-Picher company, where germanium was only an insignificant by-product of tin production until then. Doping processes were developed (also at the beginning of ion implantation) and the electrical properties of the doped semiconductors were determined. The Purdue group made its first discoveries about the variability of the resistance in semiconductors depending on the applied voltage in the run-up to the development of the transistor around 1947 at Bell Laboratories in the group of John Bardeen , Walter Brattain and William Bradford Shockley . The research at Purdue influenced the researchers at Bell (they even used pure germanium crystals from Purdue for their first transistor) and Lark-Horovitz and his colleagues were "hard on the heels" of Bell scientists on the way to the transistor . At that time, one of his employees was Seymour Benzer , who later switched to biochemistry and who, as a doctoral student, made a decisive contribution to the development of tip diodes for high voltages (suitable for use in radar).

Thanks to its success during World War II, the Physics Faculty in Purdue continued to receive generous government funding after World War II and became a leading research center in solid state physics in the United States.

Frederick Seitz , who worked with him at the MIT Radiation Laboratory in the 1940s, described him as follows: Lark-Horovitz was a remarkable man. He was very much like an artist, and he searched the literature and found all kinds of obscure publications from obscure magazines. Lark-Horovitz exerted great pressure on the members of his research group and expected unconditional commitment (he kept a record of the working hours of his employees, none of whom dared not appear at the weekend) and new research results, but also had the ability of his group members for research to inspire. There were regular group seminars in which the latest research results were presented inside and outside the group.

He died of a heart attack while working in his office.