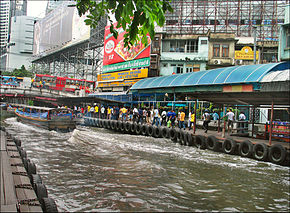 Khlong Saen Saep ( Thai คลอง แสน แสบ ) is a canal ( Khlong ) in central Thailand that connects to water from the Mae Nam Chao Phraya ( Chao Phraya River ) to Prachin Buri and Chachoengsao . It is the longest canal in Thailand. 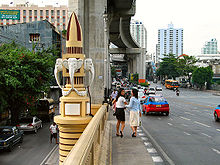 Because of the conflict with Annam over Cambodia , King Rama III. a canal that leads east out of the capital. He was supposed to speed up the transport of troops and military supplies to Cambodian territory. In 1837 the excavation of a dead straight canal was commissioned. It has a length of 53.519 km, that is in traditional Thai length measures 1337  Sen , 19  Wa and 2  Sok . The construction time was three years.

The canal begins north of the Hua Lamphong main station in Bangkok, where it flows into the Khlong Phadung Krung Kasem and thus represents a direct connection to the Mae Nam Chao Phraya via the Khlong Maha Nak . It first runs roughly parallel to Petchaburi Road until it turns northeast in the Khlong Toei district . It then follows the Ramkhamhaeng expressway parallel to Min Buri . From the village of Nong Chok it leads through the province of Chachoengsao due east until it flows into the Maenam Bang Pakhong at the border with the province of Prachin Buri .

There are various theories about the origin of the name: 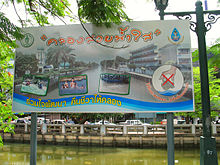 According to an article in the Bangkok Post in September 2003, a small group of activists who live on Khlong Saen Saep in Bang Kapi have come up with a way to rid Bangkok's canals of dirt and stench. You have come up with the so-called "ionic plasma enzyme" ( enzyme ionic plasma - EIP), which u. a. consists of citrus peel, vegetable waste and syrup that are fermented for about 15 days. This mixture contains natural micro-organisms that are said to improve the ability to more quickly break down organic waste in the water of the khlongs. At the same time, the citrus fruits should improve the smell. Proponents of the EIP system claimed it was very effective: They poured about 13,000 liters of liquid EIP in five places in the Khlong Saen paeb on August 13, 2003, Asst. Prof. Taeng-On said, “The putrid stench of the Saen-Saep Canal was gone within an hour. The next morning the water was clean. But since wastewater was being discharged again and again, the water of the canal was black again shortly afterwards. ”The EIP should now be filled into bottles and distributed to households along the khlong, which, for example, should be B. move the flush water of the toilets before it is discharged into the sewer. 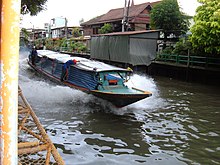 Scheduled boats have been back on the Bangkok khlongs for several years. In 2004, according to a report in the daily Thai Rath, an average of 80,000 passengers a day used the boats on the Khlong Saen Saep. At first it was unimaginable for foreigners to drive through the heavily polluted canal in a boat. But today a trip with a khlong boat is an alternative to the traffic chaos on the streets, for example to get quickly from the Golden Mount past Jim Thompson House and the Pratunam market to The Mall Bangkapi in the northeast of Bangkok. The boat only needs about 50 minutes for this distance (approx. 17 km) in rush hour, while a bus usually takes more than three hours. Disadvantages, however, are the dirty splash water that can get inside the flat boats despite the plastic curtains on the sides, and the noise of the engines. Depending on the distance, the fare is between 10 and 20 baht (less than € 0.50).