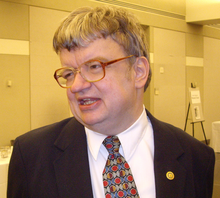 Laurence Kim Peek (born November 11, 1951 in Salt Lake City , Utah , † December 19, 2009 ibid) was an American island talent (savant syndrome). He was characterized by an exceptional memory. His brain had shown an abnormality since he was born - both hemispheres were only minimally connected, which could possibly have led to his island talent. Peek was the model for the character of the autistic Raymond Babbitt in the 1988 film Rain Man , through which he became widely known. Most recently, Peek was considered one of the most famous islanders. The autism researcher Darold Treffert described him as a “mega savant”.

Kim Peek was born with such severe intellectual disabilities that doctors advised his parents to put him in a home. At birth, his skull was a third larger than that of healthy children, and the neck muscles could barely hold the weight. As a child he stood out for the fact that he was years behind in walking and talking, but exhibited strange habits such as sorting scraps of paper, whereby he reacted hysterically to disturbances in his activity . He started reading at the age of 16 months and by the age of four knew eight volumes of lexicon word for word by heart.

Until late 1963, when he was twelve years old, his handicap received no further attention. However, when he was supposed to recite a poem for Christmas gifts, he recited the Christmas story from the Gospel of Luke from Emperor Augustus to the Shepherds with about 40 lines from the Bible . He had never read the story before, but heard and memorized it in church that same day.

At the age of 33 years Peek met at a meeting of the National Association for Retarded Citizens , the American Disability Association, in Arlington ( Texas ) screenwriter Barry Morrow , who, fascinated by Peeks history, this in the movie " Rain Man processed" (published 1988) .

Peek has been advocating for disabled people since his breakthrough in public. Part of his commitment was public relations work in front of students and journalists. His father, who affectionately called him “Kim-Puter” - and with whom he lived until the end, was always at his side. As a result, Peek's social skills had surprisingly improved. In recent years, a love for music has been added to the old interests. Peek was able to play some of the melodies of his mother's records, which he had heard in his childhood, with one finger on the piano. He should have remembered every melody he had heard.

Peek died of complications from a heart attack at the age of 58.

Peek had an extraordinary memory capacity . According to his own statement, he knew the contents of 12,000 books almost by heart. It was enough if he had read the book only once. He only needed to look at each page of a book about seven seconds to memorize the entire content. He captured one page at the same time with each eye. After that, he wasn't ready to read the book again. After reading it, he was able to reproduce the content 99% correctly. He limited himself consistently to non-fiction books, in particular to those that compile facts.

In addition to memorizing books, Peek also mastered calendar arithmetic . He knew by heart various historical data, bus connections, the road network in the USA and Canada and the telephone codes and postcodes of these countries.

The latest investigations of Peek's brain showed, in addition to the enlargement and the barely existing connection between the two halves of the brain, that the transition from the cerebrum to the inner layers of the brain was hardly pronounced. Peek's cerebellum was also remarkably small.

According to modern neurobiology, a lack of connection between the two halves of the brain leads to an unchecked flow of information into consciousness, since the right and left brain hemispheres do not intervene and, for example, control access rights to information from the other half of the brain.