The church massacre in Liquiçá took place on April 6, 1999 in the Indonesian- occupied East Timor during the wave of intimidation by pro-Indonesian forces ahead of the referendum on the future of East Timor . The victims were murdered in the Catholic Church of São João de Brito in Liquiçá by members of the pro-Indonesian militias Besi Merah Putih (BMP) and Aitarak , regular Indonesian soldiers and police officers. 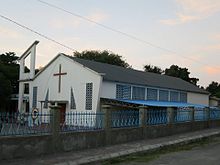 On April 5, the BMP had already attacked the city of Vila de Liquiçá . At least seven people died, 150 houses were burned down, more than a thousand people sought protection in the parish church of São João de Brito and the adjacent parish hall in the Dato district. The following day, the BMP surrounded the church grounds. After hours of tense negotiations during which police officers asked the priest to extradite a leader of the CNRT independence movement , militia officers, supported by the army and police, attacked the church premises.

Parish Church of São João de Brito after the renovation

Parish Church of São João de Brito after the renovation

The crime has been investigated by police forces under the command of the UN . Investigators from Australia , Great Britain , New Zealand , the Philippines and the USA were involved . Exhumations were carried out and testimony recorded. As a result, charges of murder, torture and displacement were brought against 21 Indonesian officers and members of the East Timorese pro-Indonesian militia.

The Liquiçá church massacre was one of the ten main cases investigated by the United Nations Prosecution in East Timor ( Serious Crimes Unit ). The case was the first to be tried in court. The trial was held in front of the Special Panels for Serious Crimes SPSC under judges Benfeito Mosso Ramos ( Cape Verde , chairman), Antero Luís ( Portugal ) and António Helder (East Timor). The procedure was carried out in five languages: Portuguese , English , Indonesian , Tetum and Tokodede , the local language around Liquiçá. In court, the defendants gave detailed testimony about the involvement of the Besi Merah Putih militia , including reports of militia ceremonies allegedly forcing them to drink a cocktail of alcohol, animal blood and drugs before participating in the attack on the church Liquiçá participated.

The international investigators were originally surprised that none of the victims had fled. Then it became known that the Indonesian army had surrounded the church. Although she did not participate in the attack, she prevented the victims from fleeing. Further testimony suggests the direct participation of Indonesian soldiers who allegedly wore civilian clothes to disguise themselves as militia officers. The spokesman for the pro-Indonesian parliamentary group and later Minister for Tourism and Trade Gil Alves claimed that the militia responded by attacking gunfire from the church premises.

Leoneto Martins, Tomé Diogo , Eurico Guterres and João da Costa Tavares were the main suspects and are considered to be the leaders in the massacre. They are all East Timorese. Eurico Guterres was sentenced to ten years in prison on November 27, 2002 by the Jakarta Human Rights Court. It was not until May 2006 that Eurico Guterres finally had to begin his ten-year prison sentence, but was then acquitted again by the Indonesian Supreme Court in April 2008.

The number of deaths is controversial. While official Indonesian sources give it as 61, Timorese sources report over 200 victims. The remains of about a dozen victims were recovered from Lake Maubara by Australian marine divers in 1999 .