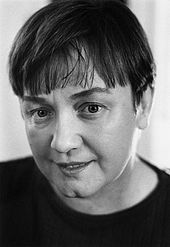 Krystyna Maria Kuperberg , b. Trybulec (born July 17, 1944 in Tarnów ) is an American mathematician of Polish origin.

Her parents, Jan W. and Barbara H. Trybulec, were pharmacists with their own pharmacy in Tarnów. Her older brother Andrzej Trybulec , her husband Włodzimierz Kuperberg and their son Greg Kuperberg are also mathematicians. The daughter Anna Kuperberg is a well-known American photo reporter.

At the age of 15, she and her parents moved from Tarnów to Gdansk . In 1962 she began studying mathematics at Warsaw University . She heard her first mathematics lectures from Andrzej Mostowski ; later she attended topology lectures with Karol Borsuk and became fascinated by this field.

Krystyna Kuperberg consequently obtained her master's degree in topology in 1966 under the direction of Borsuk. In the following years she mainly dealt with topology, in addition to Euclidean geometry, and later also with discrete geometry. In 1969 she and her family left Poland, initially for Sweden , and then in 1972 to Houston , Texas in the United States . In 1974 she did her PhD with Karol Borsuk (and William Jaco ) at Rice University (Dissertation: The Shape Theory Analogues of Some Classical Isomorphism Theorems for Homology and Homotopy Groups). In the same year, she and her husband took up positions at Auburn University . In 1984 she received a full professorship there.

She also taught at Oklahoma State University (1982–83), the Courant Institute of Mathematical Sciences of New York University (1987) and in the 1995 summer semester at the University of Paris XI in Orsay.

In 1987 she solved a previously open problem from Bronisław Knaster . In the 1980s she began to be interested in fixed points and in topological aspects of dynamic systems . In 1993 she constructed a smooth counterexample to the Seifert conjecture that all non-singular continuous vector fields on the 3-sphere have a closed solution curve. The conjecture had already been refuted in 1974 by Paul A. Schweitzer, assuming less prerequisites for differentiability .

She continues her work on dynamic systems together with her son.

In 1995, Kuperberg received the Alfred Jurzykowski Prize from the Kościuszko Foundation. In 1996 she received the Research Excellence Award from the College of Sciences and Mathematics at Auburn University. She is also active in the American Mathematical Society (AMS) and its fellow.