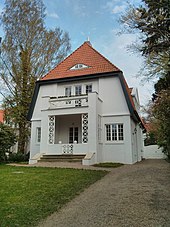 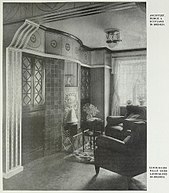 The cottage autumn is located in Bremen , district Schwachhausen , district of Radio Bremen, Schwachhauser Military Highway 335. The house was built in 1909 to designs by Alfred Runge and Eduard Scotland . It has been a listed building in Bremen since 1994 .

The two-storey, rectangular, plastered house with the hipped roof and the veranda was built in 1909 at the turn of the century in a country house style for the businessman (Carl Georg) Theodor Herbst (1876 – after 1956). A front terrace and a balcony were removed, the living space was enlarged in 1948 and a garage was added in 1955.

Theodor Herbst's father, the dentist Wilhelm Herbst, founded the Bremer Goldschlägerei ( BEGO since 1967 ) in 1890 , which the son continued to run.

The architects Runge and Scotland in Schwachhausen u. a. the house Runge , house Wiedemann and the houses at Schwachhauser Ring 2 and 4 .