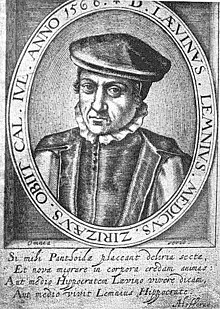 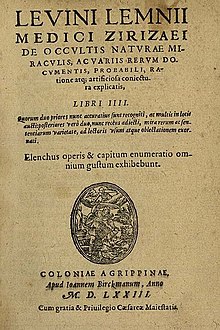 Lemnius was born in Zierikzee in 1505. From 1521 he studied medicine and Catholic theology under Andrea Versalio at the University of Ghent and later at the University of Leuven in Leuven (Dutch: Leuven ). He also acquired knowledge of Greek and Hebrew . After his studies , he settled for some time in Switzerland , Italy , where he received his doctorate in 1526, and in Great Britain , before returning to his home town of Zierikzee in 1527 . Lemnius was a popular doctor in Zierikzee, as he provided medicine and healed many citizens from Zierikzee and the Schouwen-Duiveland area during the three infection crises in 1529, 1532 and 1537 . After the death of his wife he became a priest in the Sint-Lievens-Münster in Zierikzee. Three days after his wife's death, he laid a tombstone on his wife's grave . Lemnius turned mainly to mysteries , phenomena, and natural wonders . While similar or other works of his time tried to entertain other people, Lemnius had the particular aim of preserving and naturalizing the presence of God in nature against the trend of contemporary philosophy . Levinus Lemnius died in Zierikzee in July 1568.

Lemnius published various works on the subjects of man and physique , nature and natural wonders and faith . Works by him are: