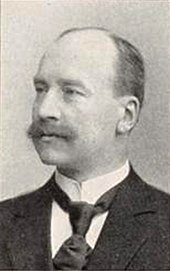 Portrait relief on the tomb in Dortmund

Ludwig August Hugo Holle (born June 27, 1855 in Schwelm ; † December 12, 1909 in Dortmund ) was a German lawyer and Prussian administrative officer . From June 24, 1907 to July 14, 1909, he was the Prussian Minister for Spiritual, Educational and Medical Matters (Minister of Education).

Holle studied law . From 1878 he was a court referendar and from 1883 a court assessor . A year later he switched to the special agricultural commission in Höxter . In 1889, Holle was appointed a councilor. From 1890 he worked as an unskilled worker in the Prussian Ministry of Agriculture. In 1891 he was promoted to the rank of Privy Councilor and Lecturer . Another promotion took place in 1895 to the Secret Upper Government Council. In 1900 Holle became governor of the Prussian province of Westphalia . From 1904 he was Undersecretary of State in the Prussian Ministry of Public Works . From 1907 to 1909 he was the Prussian minister of education, although he was already on leave in 1908 for health reasons.

Since 1876 he was a member of the Corps Bremensia Göttingen .

Ludwig Holle's grave is in the east cemetery in Dortmund .