Paul Ludwig Adalbert Falk (born August 10, 1827 in Metschkau district of Striegau , Province of Silesia , † July 7, 1900 in Hamm ) was the Prussian minister of culture and president of the Hamm Higher Regional Court .

Falk was the son of the pastor of Waldau near Liegnitz and (from 1832 to 1838) at the Gnadenkirche von Landeshut Ludwig Falk (1801–1872), the later royal consistorial councilor (from 1838) and (as successor to his father Johann Gottfried Ludwig Falk) superintendent , and his wife Emma Hoffmann. Alexander Falk was his uncle. Falk received his first lessons from his father, who was friends with the future Prince-Bishop Förster and was also first preacher at the (Reformed) court church in Breslau , and later he attended the secondary school in Liegnitz.

At the age of 17 Falk began to study law at the Friedrich-Wilhelms-Universität zu Breslau in 1844 ; later he switched to the same subject at the Friedrich-Wilhelms-Universität zu Berlin , where he finished his studies in 1847 with a doctorate . After the auscultator examination in 1847, Falk entered the civil service. In 1850 he got a job as a court trainee and also worked as an assistant at the Wroclaw public prosecutor's office.

In 1853 Falk was promoted to prosecutor and transferred to Lyck in East Prussia . In 1861 he was appointed to the same position at the Berlin Supreme Court and as such Falk worked again as an assistant in the Ministry of Justice . During this time Falk revised the general land law for the Prussian states ( five-man book ) and was able to recommend himself for "higher tasks" in the Ministry of Justice with this work.

In 1851 Falk married Rose Passow, a daughter of the philologist Franz Passow, in Breslau . With her he had three daughters and three sons. One of his sons became a Prussian infantry general during the First World War .

Although he refused to be elevated to the nobility , he requested the appropriate elevation for his son, who at that time had the rank of lieutenant in the Guards Fusilier Regiment . He received it in 1879 and was henceforth Adalbert von Falk .

From 1858 to 1861 Falk was a member of the Mathis parliamentary group in the House of Representatives and represented the Lyck district. As a member of the military commission of the state parliament he supported u. a. the required reforms of the army. In 1862, Falk was appointed appellate judge in Glogau , but was recalled to the ministry by Justice Minister Adolf Leonhardt and promoted to lecturing council. In 1867 Falk was elected to the constituent Reichstag of the North German Confederation for Glogau. In 1871, Falk worked as a representative of the government in the Federal Council and became a member of the Commission for the German Code of Civil Procedure.

After the resignation of Education Minister Heinrich von Mühler , Falk took over the Ministry of Education on January 22, 1872. His term of office was marked by the Kulturkampf . In the Kulturkampf he supported Bismarck's fight against the influence of the Catholic Church. He disempowered the Catholic department in the ministry set up by Friedrich Eichhorn . Falk subjected important aspects (e.g. the training of theologians) of the Catholic Church to the control of the state through the so-called May Laws . The Church's influence on elementary schools ended with the School Supervision Act . Furthermore, his work was directed against the Polish-language teaching of Catholic school children in Poznan and West Prussia .

All these measures met with strong opposition from the Catholic Church and the Center . Thanks to the support of the National Liberals, he was able to win majorities in parliament for the laws. These events ultimately strengthened the separation of church and state .

Falk implemented an increase in teachers' salaries. By increasing the number of seminars and through appropriate organization, the number of teachers and school classes rose very considerably (about 4,000 teachers more than before he took office). He provided the universities with more abundant means and increased expenditure on the maintenance of art.

A teaching law, which from then on was supposed to secure the school system against arbitrary administration and which was completed in draft in 1876, failed because the finance minister objected to the additional costs. The Evangelical Church of the older provinces of Prussia sought Falk by 1875 approved by an Extraordinary General Synod and approved by Parliament in 1876 for the synodal church provinces to give an independent position in the eight old provinces of Prussia.

But it was precisely this that the Orthodox court preachers' party used to agitate Kaiser Wilhelm I against the liberal minister whom they hated, first to overthrow the president of the old Prussian Evangelical Church Councilor Emil Herrmann , then to force Falk himself to resign in 1878. Mutual compliance allowed Falk to remain in office in 1878, but when Bismarck approached the Center Party in 1879 on the occasion of the tariff negotiations in the Reichstag , Falk preferred to forestall a possible dismissal by renewing his application, which was approved on July 14, 1879, and to limit oneself to parliamentary activity. Falk belonged to the Reichstag since winning a by-election in the constituency of Liegnitz 3 (Glogau) on January 9, 1873. From 1874 to 1882 he represented the constituency of Liegnitz 4 (Lüben - Bunzlau), initially did not belong to any parliamentary group, then was an intern in the parliamentary group of the Reich Party from 1874 to 1880 and joined the National Liberal Party in 1881 . On January 31, 1882, Falk resigned from the Reichstag. He belonged to the Prussian House of Representatives from 1859 to 1861 for the constituency 5 Gumbinnen / East Prussia, and from 1873 to 1882 as a member of the constituency of Düsseldorf 5 (Duisburg - Essen). In the House of Representatives he remained non-attached. Appointed President of the Higher Regional Court in Hamm in 1882, Falk resigned both mandates and withdrew completely from political life. A collection of his speeches remained unfinished.

Falk's work for the reformation of the elementary school system

As minister of education, Falk tried to reform the elementary school in three legislative initiatives:

Falk as President of the Higher Regional Court in Hamm 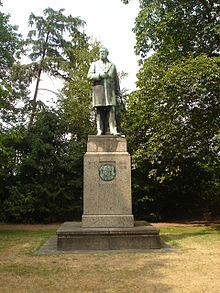