Size comparison of different species of the eponymous genus Machimosaurus with a diver.

Like their closest relatives, the Teleosauridae , machimosaurids looked like today's gavials at first glance . Their hind legs were significantly longer than the front legs, their snout was narrow and, especially in early forms such as the Macrospondylus, still relatively long. In contrast , in many later genera such as Machimosaurus or Lemmysuchus , the snout was significantly shorter. Unlike the teleosaurids, the nostril was on the top of the tip of the snout. As with most other crocodile species , the machimosaurid body was covered with skin bone plates .

Within the subfamily Machimosaurinae, the size of the upper temporal windows increased significantly, while the number of teeth decreased. The teeth in this group of machimosaurids were characteristically blunt and formed a clearly ribbed enamel .

Machimosaurids were usually relatively large marine crocodiles. Even the early genus Macrospondylus could reach lengths of over five meters. The largest known Machimosaurid is Machimosaurus rex with an estimated length of 7.15 meters. 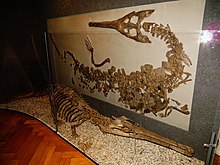 Abbreviated cladogram of the Teleosauroidea according to Johnson et al . (2020):

Machimosaurids lived mainly in the marine habitats of the former Tethys Sea . They were found in lagoons and estuaries as well as on the high seas . Especially early machimosaurids were probably opportunists in their diet. In later machimosaurids, namely within the subfamily Machimosaurinae, a trend towards shorter snouts, pronounced jaw muscles and robust, fluted teeth can be observed. This is interpreted as adaptations to a durophage ("shell-cracking") diet. In fact, several fossils of turtles are known that appear to have been attacked by Machimosaurus .