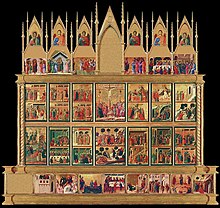 The Maestà of the high altar of the Siena Cathedral (Italian: Maestà del Duomo di Siena or Maestà di Duccio ) was created between 1308 and 1311 by Duccio di Buoninsegna for the Cathedral of Siena and replaced an older, smaller altarpiece, the highly venerated Madonna del voto by Dietisalvi di Speme . The panel painting was originally about 5 m wide and 4.70 m high and had a front and a back with more than forty individual images, most of which are distributed today. The remaining parts are now in the Museo dell'Opera metropolitana del Duomo (Siena Cathedral Museum).

The front of the altarpiece faces the people, is designed to be viewed from a distance and is therefore quite large. It traditionally shows the icon : the enthroned Madonna, the city saint of Siena, surrounded by her heavenly court of saints and angels. The Madonna is very similar to its predecessor, the Madonna del voto , which was supposed to secure the goodwill of the people for the new work. The picture is complemented by the four city saints Ansanus, Viktor, Savinus and Creszentius, who kneel in front of the Madonna and intercede on behalf of the people of Siena. The maestà with the child is depicted from the perspective of meaning: unnaturally large and in the center of the picture. In 1771 the front and back were separated from one another, and later there were regrettable dismantling. Eight predella tablets migrated abroad, where they are now kept in various collections and museums. A field of the predella is lost. The remaining parts - Maestà and the corresponding scenes on the reverse, as well as seven images of the predelle - are now in the Cathedral Museum in Siena. Only the middle part of the front, the Madonna surrounded by angels and saints, is still preserved today as a unit. The presentation of the whole altar requires the reconstruction of missing parts and the original framing. It turns out that the work had a total of five picture zones and an architectural (Gothic) outline with gables, pinnacles and struts.

The back is aligned with the choir, designed for close-up, and was only visible to clergy. It replaced the Christ altar that is usual in this position and showed the Passion of Christ in an ensemble of small panels.

Of the original twelve angels on the altar coronation, only four are preserved in various museums outside Italy, in the Mount Holyoke College Art Museum , in South Hadley , Massachusetts , in the Philadelphia Museum of Art , Philadelphia , in the Museum Stichting Huis Bergh , 's-Heerenberg , Netherlands and an angel formerly in the Stoclet collection .

After 1331 four side altars were erected, which were consecrated to the four city saints Ansanus, Viktor, Savinus and Crescentius. The four altars were designed in the following 20 years by important painters from the city. At that time, an overall program was probably established that made a reference to the high altar with the Maestà.

A special feature of the altars is the moving aside of the saints, who are no longer shown in the middle as usual. Instead, a scene from the life of Our Lady was shown (in the reading direction from left to right), the saints were shown on their Dexter side, i.e. on their right. The old retable type , which always depicted the holy person in the center, was replaced by a narrative altar painting - an art-historical revolution.

The four altars in the direction of reading

The unusual thing about Lorenzetti's painting is the reinterpretation of the three architectural compartments of the altar into two rooms: the left shows the anteroom of the temple, where Joachim receives the news of the birth of his daughter, the middle and right show the birth room. The vanishing point of the painting is offset to the right instead of on the central vertical of the painting, which locates the viewer in the central nave of the cathedral. It's like looking into the two simulated interiors from there. This oblique view obviously has a reference function: it subordinates the side altar to the Maestà, in front of which one would stand from the observer's point of view.

Bartolomeo Bulgarini, who created the last altar after the plague death of his predecessors in 1251, was also based on Pietro Lorenzetti's model of perspective representation.

The large round window in the choir from 1287 is visible above the retable. In the round window is the Assumption of the Virgin Mary , above it the Coronation of Mary , below the Mary's death in the corners the evangelists with their attributes. On closer inspection, the window contains barely visible writing, which suggests that the window is not only intended for the earthly observer (who cannot see the writing from the church floor). In relation to the Maestà, the window continues the narrative of the life of Mary.

Including the side altars, the paintings are to be understood as a narrative of the life of Mary. The side altars show stages of her life in a horizontal direction, while the Maestà depicts the Incarnation of Christ.

Including the round window to the Maestà, Maria's life after death is narrated vertically: death, ascension, coronation, commanding the armies in heaven.

The displaced vanishing points of the side altars towards the Maestà and the imagined viewer position, i.e. the location of the viewer, repeatedly direct the gaze to the Maestà: everything is subordinate to it.