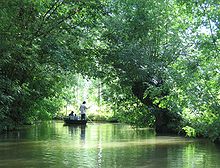 The Marais Poitevin is a swamp region on the Gulf of Poitou on the French west coast north of La Rochelle . It forms the border between the historic French provinces of Aunis and Poitou . Because of its canals, the humid part is called Venise Verte , the green Venice.

At first the area was flooded by the sea. After this had gradually withdrawn, a swampy landscape remained. From the 11th century , the monks of the surrounding monasteries ( Maillezais , Saint-Pierre-le-Vieux, l'Absie, Saint-Maixent , Moreilles ) began to use the area with its fertile soil for agriculture. For this purpose, the land was drained into the Sèvre Niortaise river with the help of canals and dykes ; As a result, the first agricultural parcels were created in these drained parts. Under Henry IV , the work was intensified; this also brought in Dutch.

Today the Marais Poitevin extends over approximately 100,000 hectares (in three departments : Vendée , Deux-Sèvres and Charente-Maritime ). Its two components, the dry and the wet Marais (the Venise Verte) occupy 70% and 30% of the total area.