The Marienkapelle in the former Upper Swabian Carthusian Church of St. Maria in Buxheim near Memmingen was added to the north wall of the Brothers Choir in 1709. A flat vault with stitch caps covers the almost square room with a floor area of ​​around 4.6 × 4.1 meters. The corners are rounded. The baroque design comes from the Zimmermann brothers, their brother-in-law Dominikus Gebhard and an unknown Benedikt Zöpf . 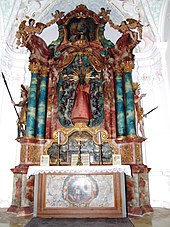 The altar of the Lady Chapel

The altar of the Marienkapelle was built in 1702. For the renovation in 1739, Johann Georg Reusch created the ornamental carvings, Anton Sturm the figures. The wooden pendulum shows John on Patmos in the middle , a scene that is accompanied by floral ornaments on both sides. John is sitting on the left of the picture with an open book under a tree on a rock, his gaze directed at Mary, who can be seen in the sky on the right in the form of the Crescent Madonna. A large reliquary made of marbled wood with gilded decoration is attached to the base of the altar structure. It is glazed on the viewing side. In a niche above the reliquary, there is a hermit Our Lady in a brocade-colored robe. In her left hand she holds the baby Jesus dressed in the same material, in her right a scepter and a rosary. Her head is adorned with a crown and framed by a halo. The Mother of God is flanked by two free-standing columns with forward curved plinths and equally curved entablature. The crowning is a carved canopy drapery held by putti . In the extract of the altar there is a picture of Hugo von Lincoln with a golden frame, flanked by two angels. Two angels sit on the curved beams of the pillars. The two excerpt angels and the two entablature angels hold a flower tendril. On the side of the altar, next to the pillars, there are two statues like shrine guards on Gothic winged altars. The statue on the left embodies St. George . He is depicted in armor with a double spear. One point points to the sky, the other digs into the kite below. George's head is covered with a helmet and surrounded by a halo; he wears a mustache. On the right stands St. Vitus with a golden robe that covers the right shoulder and loin. The head is surrounded by a halo. The right hand is shaped into a fist. The index finger points in the direction of the viewer, in his left he holds a palm leaf as a martyr attribute.

Of the six frescoes in the Marienkapelle, the five ceiling frescos are by Johann Baptist Zimmermann, the fresco on the south wall by an unknown painter. They illustrate invocations from the Lauretanian litany and are designed after the engravings of the book Elogia Mariana Ex Lytaniis Lauretanis Deprompta by Isaac Oxoviensis from 1700. In the center of the vaulted ceiling of the Marienkapelle there is a large round fresco, which is surrounded by four small oval frescoes. They have been damaged by moisture penetration; only sparse remains of three small frescoes can be seen. Since Zimmermann was very much based on the book, you can still determine the motifs shown in all frescoes without a doubt. 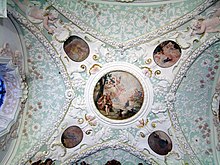 Vault frescos of the Lady Chapel

The lower half of the main fresco shows Moses in front of the burning bush. He is sitting on the left on a rock in front of two trees and pulling off his left sandal. The right foot is already bare. He wears an olive-green robe with a pink cloak. His bald head has a full white beard. The burning bush is shown on the right edge of the picture. Contrary to the biblical representation, it is not God that is to be seen in it, but Mary as a half-figure. She wears a red robe and a blue cloak. Her hands are folded like a roof in prayer, her gaze is directed towards Moses. Sheep graze in the countryside between him and Mary. Mary is also part of the motif of the Annunciation , which is thematized in the upper half of the fresco. An angel with a lily in his right hand floats above Moses on a pastel pink cloud and reveals himself to be the Archangel Gabriel with this attribute. A red scarf flutters behind its upturned wings. With his left hand he holds up a mirror that reflects a ray of light that comes from heaven onto Mary. A shadow of a second angel appears behind Gabriel, pointing to Mary with his left hand. A comparison with the Annunciation scene in the gallery vault shows a great similarity in the representation of Gabriel, who can also be seen there on a cloud. Since the upper half of the fresco shows signs of damage, a look at the engraving will help. There the ray of light comes from a triangle in heaven in which the baby Jesus can be seen with a cross in his hand. The dove of the Holy Spirit is inserted into the mirror and words from the Annunciation scene according to Luke (Lk 1, 31-35) are added to Mary and Gabriel.

The revelation of God in the burning bush to Moses is here transferred to Mary, becomes the revelation of God through his son. The Rubus incombustus , the incombustible thorn bush, is a symbol for Mary. The mirror in the hand of the Archangel Gabriel indicates Mary as Speculum sine macula, as a flawless mirror. It is just as much a symbol of chastity as the lily in Gabriel's hand and the lily bush that blooms in front of the burning bush.

Of the small pictures, only the south-eastern fresco depicting a sea beach is relatively well preserved. The land side, on which a few buildings can be seen, is bordered on the far right by a tall deciduous tree. On the left at sea, a ship is fighting its way through a thunderstorm. Above the ship, Maria kneels in a red robe with a blue cloak on a pink cloud. In her left hand she holds a shield with which she fends off arrows that are hurled by Christ, who appears in the sky above her, and threaten the sea and land. One arrow is still in her shield, others fall powerless to the ground. Mary is venerated here as Clipeus sperantium, as the protective shield of the hopeful, as the protector of Christianity.

The image of the Virgo praedicanda follows clockwise . On the copper engraving, the globe is shown in large size, surrounded by the personified four continents. On the ball sits Mary with the baby Jesus in a carriage drawn by two horses. The words from the Magnificat are assigned to Mary : ex hoc beatam me dicent omnes generationes (from now on all genders will praise me blessed). With this saying the relation to the motif of the praiseworthy virgin is clarified. The fresco shows the globe with the personification of Africa in the back right. Part of the carriage with one wheel can still be seen over the globe, everything else has been destroyed by moisture.

The blue sky in the center of the picture, clouds and part of the landscape with vegetation have been preserved in the next fresco. The design of the floor with the bush-like structure on the left can only be found in the copper engraving collection in the motif of the Stella matutina .

Regina patriarcharum - Queen of the Patriarchs 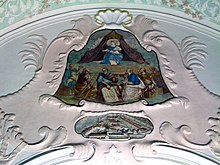 Regina patriarcharum - Queen of the Patriarchs

Above the exit on the south wall is a fresco by an unknown painter with the subject of Mary as Queen of the Patriarchs . Mary is shown in a red pointed roof tent with a golden border that occupies the upper half of the picture. She is wearing a white dress with a blue cape. The Mother of God seated on a throne wears a crown and a three-part halo can be seen around her head. In her right hand she holds a flower, the blossom of which has been replaced by the Christ monogram IHS, the left hand is raised in a majestic greeting. On the outer tent walls are the words Regina Atavis on the left and Edita Regibus on the right , which in German roughly means queen, descended from royal ancestors . Six patriarchs are gathered below Mary, recognizable by their attributes. On the far left, Abel is shown with a lamb in his arm. He was followed by Jacob with a ladder and Moses with the tablets of the Ten Commandments. Next to him are Solomon with a sword and Isaac with his sacrificial wood. On the far right, Noah is holding the ark in his hand. The first three patriarchs hold a crown in their left hand, the last three have a crown in their right. Moses points with his right admonishingly to the tablets of the law and is the only one to face the viewer directly. The painter of this fresco also strictly adhered to the copperplate engraving.

[* X] The Buxheimer choir stalls . Contributions to the building and art history of the former Reich Charterhouse in Buxheim and the restoration of the choir stalls. In: Michael Petzet (Ed.): Workbooks of the Bavarian State Office for Monument Preservation, 66 . Munich 1994, ISBN 3-87490-569-1 .