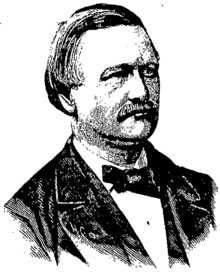 Michael Birkeland , also Mikael Birkeland (born December 16, 1830 in Egersund , † May 24, 1896 in Kristiania ) was a Norwegian archivist, historian and politician.

Birkeland grew up in Egersund. First he went to elementary school there, then to high school in Stavanger until 1848 .

His father suffered a great economic loss when Egersund burned down in 1843. So he was dependent on the financial support of relatives so that he could even attend high school. During this time his interest in politics grew. Ole Gabriel Ueland was firmly rooted in his environment. He was also a friend of his father's. In 1848 he passed the examen artium in Christiania. A year later he passed the "anneneksamen". In 1850 he had to break off his studies and became a tutor at the factory owner Knudsen in Eidsvoll . There he read Carsten Anker's letters from 1814 and also learned the oral tradition from the time of the Imperial Assembly and about Nicolai Wergeland . So it came about that, as a historian, he was particularly interested in this period.

In 1852 Birkeland became an assistant at the Reichsarchiv, which at that time was part of the Ministry of Churches. He resumed his studies and studied law. In 1855 he passed his state examination. In 1856 he became a copyist in the Ministry of Churches. In 1858 he became "fullmektig". In this office he was involved in drafting a new draft law on poor welfare. In 1863 he took over the post of Reich archivist in the church ministry. The years 1863–1874 were the most effective in Birkeland's life. As a Reich archivist, he was initially very busy with administrative tasks. He had taken over the archive in poor condition. In 1866 he led the move of the Akershus Archives to the Storting building. He continued the publication of the Stortings reports that had already started. This activity made him particularly familiar with the period from 1814 onwards. In 1874 he left the Reich Archives and became "Ekspedisjonssekretær" in the Ministry of Churches. But when the Reichsarchiv was spun off from the Ministry of Churches in 1875, he was reinstated as Reich archivist.

Due to his great interest in history and politics, he was also a member of the intellectual group Det lærde Holland , which also included Henrik Ibsen , Jakob Løkke , Ludvig Daae and Aasmund Olavsson Vinje . In his youth, Birkeland had been a radical Democrat, Republican and opponent of Scandinavianism . But in the 1960s he began to support Scandinavianism and became more conservative.

Birkeland was a member of the Kristiania City Council from 1869 to 1894. In the fall of 1879 he was offered to join the government. He refused and gave as the official reason his poor health. He was then elected as Christiania's delegate for the storting . He sat in the Storting for two seasons from 1880 to 1885. But his illness and worries with his family weighed heavily on him, so he rarely took part in debates. In addition, there was a growing aversion to the whole of parliamentary life. So he was deported to the salary and pension committee.

He belonged to the moderately conservative faction that sought to combine democratic reforms with new conservative guarantees. Birkeland pursued the goal of aligning the Norwegian constitution with the rest of Europe: participation of ministers in the negotiations of the Storting, universal suffrage, direct elections and other things. He was fundamentally a supporter of the bicameral system and the right to dissolve parliament, but knew that the government and the Høyre party were not currently in favor of this idea. On the other hand, he failed to meet the expectations that were placed on him as a politician. This was partly due to his ailing constitution, and partly to his long tenure in the ministry, which had long denied him the right to stand as a candidate in the Storting.

Michael Birkeland is considered an important historian, although his scientific publication is not very extensive, which is also attributed to his illness and his very critical attitude to his own work. Most of it was published in the three-volume Historiske Skrifter (1919–1925) only after his death . But his research was not only published under his name, but also as contributions to the work of other authors.

In particular, he worked with Denmark during the Union ; for here he found the conditions for the events of 1814 and the emergence of the new Norway. He emphasized more and more the positive sides of the union with Denmark. The majority of his manuscripts and the source copies were from this time. He had a materialistic view of history and was concerned with the life and development of the masses. In 1869 he founded Den norske historiske forening and became its first chairman. He was also the first editor of Historisk tidsskrift (1869–1879).

In 1875 he received the Order of St. Olav (Knight) for his scientific work .

The article is based on the corresponding article in the Norsk biografisk leksikon . Any other information is shown separately.