The title of this article is ambiguous. Further meanings are listed under Mob (disambiguation) .

The expression mob ( English mob "incited crowd", from Latin mobile vulgus "irritable crowd") mostly pejoratively designates a mass of people of the common people or a crowd of people with a predominantly low educational and social level ( pejorative also common people , mob , Plebs , rabble , crowd , called crowd ). In the English language, this original name Mob is also used for a gang or for gang crime ; in the USA also for the Mafia . 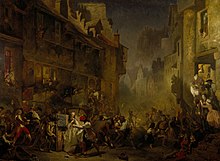 The negative term mob describes a more or less specific group of people who act together without any recognizable leadership. The mob, acting on its own accord in a group dynamic , has short-term destructive goals (looting, public executions and the like); its radical expression is revolt , the revolt .

The mob caused commotion and riot, but they did not analyze or discuss. "The revolutionism of the 'mobs' was primitive," said the Marxist social historian Eric Hobsbawm . The mob rose for a short time, made a riot, ignited and rioted, but soon lost energy and desire or was smashed by state power - and then lapsed into passivity for a long time. The mob in the narrower sense only disappeared with the emergence of an industrial working class and its organization in socialist parties and unions.

With Karl Marx , the riot of a mob as an action of the " lumpenproletariat " is strictly differentiated from the uprising of the " proletariat ". In sociology , the actions of the mob are discussed with the help of the distinction between the “ crowd ” and the “ crowd ”. In her main political work, Hannah Arendt describes Elements and Origins of Total Rule (1951), a temporary alliance between "mob and elite ". According to her, Hitler's “hysterical fanaticism” and Stalin's “vengeful cruelty” bore traits of the mob.

The mob in the narrower sense was a typical phenomenon in the pre-industrial cities, which included day laborers, beggars, the poor and the socially excluded. These different groups came together again and again spontaneously and suddenly for militant protests. But there was neither a fixed organization nor an ideological objective or even a political program.

A special form of the mob is the lynch mob , which - according to historical sources - occurred particularly frequently at the time of the witch burnings in Europe and in the 19th and 20th centuries in the Wild West and in the southern states of the USA . In films and books he is often described as a pack that is classically armed with torches and pitchforks.

In the early modern period , such mobs primarily haunted alleged witches and practiced vigilante or lynch justice - or the lynch mob ensured that these alleged witches were burned at the stake . In the Wild West, lynch mobs emerged primarily to hunt down imprisoned criminals before they could be brought out of town for trial.

The phenomenon of the spontaneous formation of mobs can also be used to cover up the actual originators of purposeful, secret (" clandestine ") political actions (such as lynching or the devastation and plundering of a ghetto associated with murders and massacres ).

In the USA , “ the Mob ” particularly refers to the organized crime of the US American Cosa Nostra and other gangs . Members and the people and cliques involved are referred to as mobsters .

The term Blitzauflauf , but mostly English Flashmob ( flash "Blitz", mob "Mob"), also Smart Mob ("intelligent crowd") or Smart Mobbing , describes a short, apparently spontaneous crowd in public or semi-public places, where each other usually do not know the participants personally. Flash mobs are organized through weblogs, newsgroups, email chain letters, or cell phones. As a result, they actually do not fall under the above definition of 'mob' as a set of self-motivated individuals without guidance.

Although the original idea was explicitly non-political, there are also flash mobs with a political background.

In contrast to the negative connotation of the term mob , the crowds of flash mobs are mainly made up of participants with a high level of education and social welfare as well as charitable activities.