The bonnet opens from the side

Rover V-8 engine in the Morgan Plus 8 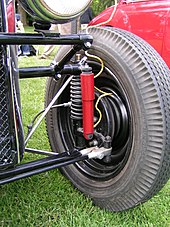 Morgan Plus 8 in racing trim at the Oldtimer Festival 2007 in the paddock of the Nürburgring. During its playing days, the Plus 8 was rarely used in races outside of Great Britain. A race planned for Le Mans did not materialize.

The Morgan Plus 8 is a 1930s-style open-top sports car with an 8-cylinder Rover V-engine , which the Morgan Motor Company built around 6000 times from September 1968 to 2004. When production of the engine was discontinued, the construction period of the Morgan Plus 8 also ended, which was replaced by a similar model with a V6 engine. There was a new Plus 8 between 2012 and 2018, but with contemporary technology and a slightly different exterior. The successor model Morgan Plus Six was presented at the 89th Geneva Motor Show in March 2019.

After around 25 years of continuous success with motorized three-wheelers , Morgan built the first four- wheel sports car, the Morgan 4/4, with a Coventry Climax four-cylinder engine in 1935 . This engine had a displacement of 1122 cm³. It was followed by a 1.3 liter Standard Motor Company and a variety of others. The basic construction was retained during the entire construction period, also as Plus 4 and from 1968 as Plus 8: a frame made of steel and a body in composite construction, i.e. with a frame made of ash wood that is planked with sheet metal. The chassis consists of a rigid axle on leaf springs at the rear and the individual wheel suspension typical of Morgan with straight-line guidance and coil springs at the front.

The Morgan Plus 8 has a steel ladder frame on which a 94-part wooden frame made of ash wood is built, which carries the hand-driven sheet metal of the body. The bonnet is noticeably long, divided lengthways and can be folded up from the side, as was otherwise only to be found on a few vehicles until the mid-1950s. As a real roadster , the car only has primitive weather protection, a relatively small windshield with (initially three) small windscreen wipers, deeply cut, front-hinged doors and clip-on side windows; the spare wheel is on the outside of the rear. The first version of the Plus 8 with an interior width of 1170 mm and a seat depth of 500 mm also offers enough space for two people. A contemporary test also states that the driver's seat can be pushed back enough "so that the fine Astrali leather steering wheel can be gripped at an acceptable distance ..." The display instruments are in the middle of the dashboard (until the mid-1970s) , whereby the tachometer is placed in the driver's field of vision depending on the right or left hand drive.

The front independent suspension of the Plus 8 is based on a design by Harry FS Morgan from 1909. It works with swivel and sliding joints on each wheel, which are attached to a cross member of the frame. A joint consists of a vertical, round support column (guide tube) on which a sleeve slides, which is twisted for steering and pushed up for compression. The sleeve is supported on a helical spring that surrounds the support column. The rear rigid axle with telescopic shock absorbers is suspended from longitudinal leaf springs. The first models up to and including 1982 had a worm steering with steering fingers, since 1983 it has been a rack and pinion steering. Disc brakes are installed at the front and drum brakes at the rear. Light alloy wheels were part of the standard equipment right from the start.

The Morgan Plus 8 had a four-speed gearbox with center shift and rear-wheel drive with limited-slip differential until 1976 . First gear was not synchronized until 1972; the later models have full synchronization. From 1977 it is a five-speed gearbox. The clutch is operated hydraulically. A special feature of the VW Beetle up to August 1957 is the Plus 8's accelerator pedal with a roller instead of a step plate; In the beginning, there was also a button above the accelerator pedal, which had to be pressed as daily as possible in order to pump a small amount of oil from the crankcase of the engine to the parts of the front axle to be lubricated.

In an early test, the elasticity of the engine was praised, as was the acceleration of the car from 0 to 100 km / h in 7.5 seconds. Regarding the top speed of 201 km / h, it was said: “At 173 km / h, the test car had already reached the red area at 5000 revs on the rev counter, which suggests that the rear axle ratio was too tight given the limited turning capacity . After all, it is comforting that the Morgan's engine performance is good for 200 km / h - you don't necessarily want to drive this 200. Because at 140 km / h all hell breaks loose and you feel transported back to the prehistoric times of the automobile. "

Special features for the US market

Morgan had already created a good sales market in the USA in the 1950s and 1960s, while sales figures in Europe stagnated. However, when stricter laws on exhaust emissions were to be introduced in the USA at the beginning of the 1970s, all Morgans imported from 1974 to 1992 (98% of which were Plus 8) were converted to propane gas. In addition, the body was changed in several places in order to meet the stricter safety regulations.

To mark the model's fiftieth birthday, Morgan presented the Morgan Plus 8 50th Anniversary Edition, limited to fifty copies, at the 88th Geneva Motor Show in March 2018 . Each vehicle has an individual number and a special paint finish. Every Plus 8 50th Anniversary Edition comes with a limited Christopher Ward C1 Morgan Plus 8 anniversary chronometer . The special models are the last Plus 8 to be powered by the BMW N62 engine. The purchase price for the limited vehicle is £ 107,500 net .

Commons : Morgan Plus 8  - collection of pictures, videos and audio files