As the owner of a private bank in Dessau he became the court banker of Anhalt Dukes and managed beyond several decades and the personal assets of the Prussian Crown Prince and later Kaiser Wilhelm I . Moritz von Cohn also made a name for himself as a financially strong financier of the railway construction that was developing in Germany at that time.

Moritz von Cohn was born as Moses Cohn, son of the Jewish businessman Itzig Moses Hirsch Cohn from Wörlitz and his wife Marianne Nathan. He only adopted the first name Moritz later. The daughter Julie, who was born in Berlin in 1839, emerged from her marriage to Charlotte Wolff, daughter of the Jewish banker Abraham Hirsch Wolff from Bonn . 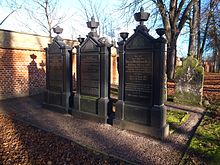 In 1817 father Itzig H. Cohn moved with his family from Wörlitz to Dessau. In the same year he opened a pawnshop called "IH Cohn" with the ducal approval. For the ten-year existence of the pawnshop, fifteen-year-old Moritz Cohn began an apprenticeship in his father's banking business in 1827. In 1830 he became a partner. Moritz Cohn began his training at the Dessau Franzschule, which was later converted into one of the first commercial schools in Germany.

As a future company owner, he should get to know important banks outside Dessau. That is why his father sent him on several trips in 1837 that would take him to the most influential German and foreign banks. In the course of these business trips, the budding banker made profound financial contacts and connections, among others with the Frankfurt banking houses Rothschild and Gebr. Bethmann and Sal. Oppenheim from Cologne. From 1839 he participated intensively in his father's business and gained increasing reputation in the financial world as a private banker and rail financier. In 1850, Cohn took over the management of his father's bank and ran it until his death.

From 1878 von Cohn was a member of the Berlin Society of Friends .

Thanks to the business success of the Cohn family, the small IH Cohn provincial bank from Dessau became known far beyond the borders of Anhalt . The considerable fortune that Baron Moritz von Cohn left to his childless daughter Julie von Cohn-Oppenheim after his death was mainly used for generous charitable foundations in the Anhalt region.

Private and court banker in Anhalt

With the aim of improving the financial situation in the lower and middle classes of the population, the state government of Anhalt-Dessau founded a ducal savings bank system in 1833, with the license of which the IH Cohn bank was commissioned from 1834 to 1865. In their function as ducal administrators of the savings bank business, the Cohns succeeded in making a name for themselves as a reputable and profitable financial institution.

Through this activity, a close relationship developed between the Cohn banking family and the ducal government of the State of Anhalt-Dessau . In particular financial matters, the majority of those turned to the IH Cohn bank. Moritz Cohn, in particular, who had been appointed court banker to the Duke in 1850, cemented the reputation of being a valued banker of the Duke and a pillar of the state's financial economy.

In 1854, for example, a large debt burden on the government treasury, which had arisen when the Anhalt-Köthen line expired and it was taken over to Anhalt-Dessau, was repaid through generous loans from Moritz Cohn. On the occasion of an economic crisis, Duke Leopold IV commissioned his court banker in 1857 with the procurement of a million dollar loan in order to protect the ducal Landesbank from bankruptcy. With Cohn's financial means, the institute could be renovated by 1863.

Private and court banker in Prussia

In the turmoil of the March Revolution in 1848 Moritz Cohn managed to win the favor of the future German Emperor Wilhelm I and to recommend himself as a loyal ally loyal to the monarchy. The banker had first been introduced to the then Crown Prince two years earlier on the recommendation of the Prussian Lieutenant General Count Wilhelm Ludwig Viktor Henckel von Donnersmarck, who lived in Dessau .

With the help of Duke Leopold IV of Anhalt, the Dessau entrepreneur financed a two-month stay in England, which the prince had to undertake immediately after the Berlin barricade fighting of 1848 following the hasty escape on the orders of his brother and King Friedrich Wilhelm IV .

Based on this, an intensive relationship of trust developed that made Moritz Cohn the private asset manager of the Hohenzollers. In recognition of the services rendered to him, Wilhelm officially appointed him court banker to the Prince of Prussia shortly after taking office as Prince Regent in 1859. In this function, he looked after petitions and credit inquiries to the regent, made cash and letters of credit available for travel and charitable donations, and handled extensive acquisitions by the ruler. As Wilhelm's long-time coffin manager, Cohn succeeded in increasing the imperial private fortune considerably, particularly through speculation in securities.

Finally, Cohn also managed the financial estate that the Kaiser left after his death on March 9, 1888 and, in the trust of Wilhelm, also took over the financial affairs of his son Friedrich III. , the subsequent German Emperor and King of Prussia, who ruled for only three months.

The railway age in Germany began with the establishment of the first German railway lines in 1835. In the years that followed, extensive private and government spending was made to expand the rail network throughout Germany. Above all, Jewish private bankers made considerable investments in the realization of the numerous railway constructions, without which the German railway network could not have been built in the expansion and speed.

The Cohns also took part in the economic development of the railway business and appeared as railway financiers. As a business partner and banker, Moritz Cohn in particular ensured that the IH Cohn bank was able to contribute significantly to the financing of the construction and operation of the Thuringian Railway , the Werra Railway Company and, in part, the Magdeburg-Halberstädter Railway . Cohn's activity as the financier of the Thuringian Railway Company and his associated services for the acquisition of extensive investment sums were ultimately also the motivation for his baronization.

The number of orders and titles that Baron Moritz von Cohn received from German rulers is large. These include, above all, Anhalt and Prussian honors, but also high honors from other German princes. The banker received six grand crosses for his achievements alone, which were considered the highest honors of the rulers. Few high-ranking officials and the military were honored to this extent.

In 1889 he received the rarely awarded Grand Cross with diamonds in the Order of the Zähringer Lion .

In recognition of his services, he was also awarded numerous titles over the course of his career. When he was made an honorary citizen of the city of Dessau in 1892, he also held the titles: Secret Finance Councilor of Anhalt, Real Secret Councilor of Saxe-Coburg / Gotha and Secret Upper Finance Councilor of Prussia. As early as 1869, due to his services to railroad construction, he was raised to the hereditary Saxon nobility by Duke Ernst II of Saxe-Coburg and Gotha and, not least, at the behest of Wilhelm I.