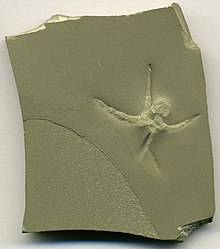 Handpiece of a carbonate mudstone (view of the upper side of the layer) with a fossilized bird's footstep, Green River Formation , Mid- Eocene of Utah

Mudstone [ ˈmʌdˌstoʊn ] (from English literally mudstone ) is a fine-grained to very fine-grained, dense sedimentary rock . The name goes back to the fact that this rock emerged from a correspondingly fine-grained - muddy - loose sediment .

The term mudstone is usually used in connection with siliciclastic rocks , but mainly in English-language literature (there also called mudrocks ). It is a not exactly defined term, which includes massive, often rather crumbly rocks, which are composed of both clay and silt particles. The starting material was a clayey silty mud. In the German-speaking world, such sedimentary rocks are also called pelites . Occasionally, clay-silty and partly also finely sandy siliciclastics, with reference to an older, largely uncommon classification, are referred to as mudstone . Siliciclastic mudstones characterize a wide variety of deposition areas, such as alluvial plains (as typical "overbank deposits") or open siliciclastic shelves . According to estimates, clay-silt rocks make up three quarters of the total volume of all clastic rocks, which means that more quartz (in the form of silt) is contained in such rocks than in sandstones worldwide . Silky clay stones with a relatively high degree of solidification, which also have a certain flaky cleavage, are generally not referred to as mudstones / -rocks but as shales in English .

In the carbonate classification according to Dunham , Mudstone describes - also in German - a rock that has emerged from a largely pure limestone sludge and has a volume fraction of coarse components of less than 10%. Its counterpart in the folk carbonate classification is micrite . Carbonate Mudstones are typical of tropical - and subtropical -marine depositional environments with low water movement, such as relatively deep and distant coastal open shelf areas, the lagoons of carbonate platforms and carbonate watten .