The Museo Argentino de Ciencias Naturales Bernardino Rivadavia in Buenos Aires (Avenida Ángel Gallardo at the Parque del Centenario) is next to the La Plata Museum in La Plata the leading natural history museum in Argentina and at the same time a research institute .

Meteorite 'El Toba' in the museum 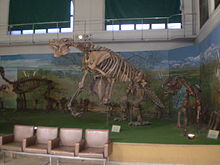 fossil mammals in the museum

In the museum are exhibits from the specific fossil mammal fauna of the Tertiary (such Glyptodon , Smilodon and Megatherium ), is known for Argentina since the 19th century, and dinosaur finds from Patagonia (also have the Argentina in paleontology made known) issued as Carnotaurus , Eoraptor , Patagosaurus , Herrerasaurus .

Meteorite finds and exhibits from the Argentine engagement in Antarctica can also be found in the museum, as well as an aquarium and a library.

The museum is named after Bernardino Rivadavia , the first president of Argentina , on whose initiative the museum was founded in 1826 in a former Dominican monastery. It contained zoological , botanical and mineralogical collections and an observatory set up by Ottaviano Fabrizio Mossotti (who was there from 1828 to 1835) , the first in Argentina, a weather station and an experimental physics laboratory.

In 1835 the museum had to move because the Dominicans got their monastery back under President Juan Manuel de Rosas . After de Rosa's replacement in 1852, the museum took off again and moved into the former Jesuit Academy in 1854 .

Museum director in 1862 was the German zoologist Hermann Burmeister (1807-1892), who had been in the country since 1857 on the recommendation of Alexander von Humboldt (who had visited the museum in the 1820s). Burmeister founded the Argentine Paleontological Society in 1864 . In 1874 he founded the museum's magazine.

New buildings for the expanding collections were built in the mid-1920s and also under Juan Perón in the 1940s.

Since 1996 the museum has been operated by the Argentine National Research Council CONICET.