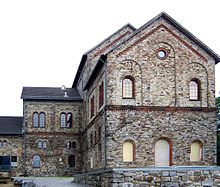 The Museum Industriekultur is a museum in the city of Osnabrück in Lower Saxony . It gives an overview of the coal mining on the Piesberg .

The museum is located on the Piesberg . Hard coal was mined there until 1898 and again to a lesser extent after the Second World War . The Piesberg was one of the largest sandstone quarries in Europe; Sandstone is still being mined on the flanks.

After the coal mine was closed on June 8, 1898, from 1906 onwards, today's main museum building served as accommodation for workers in the stone industry, who are still mining carbon quartzite on the Piesberg to this day . During the Second World War it was a camp for prisoners of war. After the end of the war, refugees from Silesia were housed in it. They lived there until the 1960s. Until the restoration, which began in 1985, the building fell into disrepair. The museum was opened in 1994, initially as a museum for the city of Osnabrück. In 1998 it became a non-profit GmbH with the Sparkasse Osnabrück as the majority shareholder.

The complex of the Museum are next to the hare bay building, built in 1893, storage building and the historical horse stables. The warehouse building served the miners as a wash house and is now used by the Museum of Industrial Culture for special exhibitions. The former stables of the stone industry are now presented as a special gem after extensive restoration. In the horse stable there is a permanent exhibition on the subject of "industrialization of the handicraft", which is characterized by a museum-educational focus and thus u. a. is available for schools, kindergartens and children's groups in Osnabrück and the region as an extracurricular learning location. For the topics of paper production, shoemaker's workshop and mills, educational offers for schools, kindergartens and children's groups have been worked out and can be booked. The Piesberger Gesellschaftshaus was built in 1871 and was the guest house and club house of the coal mine on the Piesberg. Today, the Piesberger Gesellschaftshaus cultural association uses the building with its ballroom for numerous cultural events as well as for family celebrations and other occasions. The Museum of Industrial Culture runs a historical printing house there with educational museum offers. The former colliery station, which was completed in 1857, is now home to the Osnabrück Steam Locomotive Friends Association, which has set itself the goal of collecting, refurbishing and maintaining historical rail vehicles in order to make them accessible to the general public. In addition, after almost 50 years on the Piesberg, a light railway is running again . In cooperation with the Museum of Industrial Culture Osnabrück, it is the Museum for field-gauge industrial railways Osnabrück-Piesberg e. V. succeeded in resuming light rail operations on the Piesberg. From the Museum of Industrial Culture, visitors can take the field train to the industrial culture landscape on the Piesberg. The light railroad runs from April to October every first and third Sunday of the month.

Steam engine in the museum

Information sign in the Museum of Industrial Culture (Osnabrück)

In the Haseschacht building, the museum shows the development of Osnabrück from the agricultural town of the 18th century to the modern industrial and business location of the present. The 19th century is the main theme of the museum. The permanent exhibition deals with the central themes of "hard coal mining", "the myth of steam", "early factories" and "early industrialization". The exhibition "The Magic of the Coal Forest" vividly presents the origin of coal on the Piesberg and a fascinating collection of fossils . Changing exhibitions deepen the insight into aspects of regional industrial history. A special attraction can be found in the machine hall. The ground shakes when the two steam engines from 1849 and 1916 start moving slowly and noisily. Their mighty transmission belts drive machines and a historic metal workshop comes to unexpected life: the milling machine, drill and lathe move as if by magic. From the shaft hall of the Haseschacht building you drive - like the miners once did - with a glass elevator 30 meters deep "underground" and walk into a 300 meter long historical mine tunnel that leads to the warehouse building with the former wash house where the miners collect the coal dust and which is used today for special exhibitions.