The title of this article is ambiguous. For the actress see Kathrin Oginski . 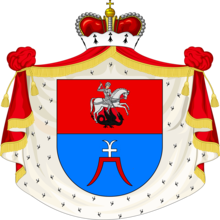 The Oginski may belong to the Rurikids and were related to the princes of Chernihiv . They come from the Smolensk region . In the 14th century they came to the Grand Duchy of Lithuania , to whose most important families they rose, although they long adhered to the Orthodox faith. In 1486 Dmitry Hlushonok († 1510) received from Grand Duke Alexander the possession of Uogintai (in the Rajongemeinde Kaišiadorys , Lithuania), after which he named himself Oginski in Polish . In 1711 they acquired the town of Maladsetschna , where they built a castle. The family led lengthy disputes with the Sapieha family , from which Charles XII. took great advantage of Sweden. In 1783 the family was elevated to the princehood of the Holy Roman Empire .

The most well-known representatives of the sex are: