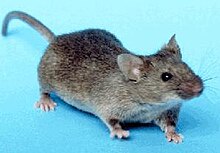 House mice usually live in groups that can contain up to 50 individuals and display complex social behavior , which is why they have developed complex communication behavior in the course of their tribal history . Most of the communication takes place via smells, which mainly originate from the urine , but also from the sweat glands under the feet and on the sides of the torso. The smells provide information about physical condition such as gestation period , "ownership rights" (especially with regard to the area ), current social behavior and position within the hierarchy as well as other facts. Visual perception is comparatively insignificant for communication with conspecifics , while auditory perception plays an important role at least in mother- nestling communication and in ranking battles .

Because they are often kept as laboratory animals, the behavior of house mice and rats has been particularly well researched.

Composition of the urine

The urine of house mice forms the basis of olfactory communication in house mice. In addition to common urea and other waste products, urine contains special chemicals: volatile fragrances with a low molar mass and non-volatile proteins with a higher molar mass. Due to the genetic diversity of house mice, each animal has its own smell, the extremely variable (and thus polymorphic ) genes of the main histocompatibility complex (MHC for short) contribute in particular . The urine also contains large amounts of major urinary proteins (MUP for short) made from small lipocalin proteins . These proteins are produced in the liver and filtered into the urine in the kidney . The urine of adult males contains 30 milligrams of MUP per milliliter of urine, the urine of adult females contains 40 percent more. These proteins bind the fragrances in a central cavity from which they slowly escape. This structure formed with proteins for the marking is called "retard capsules". The smell is inherited in variations, so house mice can quickly recognize relatives who have not been present for a long time.

The urine is usually given out regularly in small quantities during exercise in one's own territory, especially on previously unmarked areas, which means that they are covered by a thin layer. Stalagmite-like communication posts made of dust and urine often form in places that are often visited, such as feeding places, the entrance to nests and on paths that are often used . Dominant males set urine markings - unlike the non-dominant males or females who mark only ten times an hour - extremely frequently, often over a hundred times in an hour. Low-ranking males in territories of dominant males urinate very seldom, which can be interpreted to mean that exhausting arguments with the territory owner are avoided.

Effects of smell and behavior

The urine is used by mostly dominant males efficiently to mark and defend the territory . The smell of a dominant male often discourages other males from entering a foreign territory, which has the evolutionary advantage that aggressive confrontations are avoided. On the other hand, the animal is always surrounded by a familiar odor, which means that “foreign objects” can be recognized quickly because they do not have their own odor. Group members are just as perceived as non-group members, the latter always leading to “investigations” in the form of intensive sniffing and often to attacks. From time to time the dominant males release volatile fragrances in connection with the penetration into the territory, which attract females and move other males to caution or attack. In addition, dominant males often attack inferior males when they set their own scent marks in a stronger way and thus secure their place in the hierarchy. After the expulsion, the dominant male puts new urine on the spot. If a dominant male cannot defend his territory after all, competing males set numerous scent marks and thus - in anthropomorphic terms - challenge the dominant male.

Females use this competition to choose a male for mating. By giving preference to males whose odor markedly from the odor is different , is incest avoided. In addition, males cannot distinguish their own young from those of other males, thus preventing the killing of the young.

Another aspect of olfactory communication concerns the females' oestrus and cycle. A young female reaches sexual maturity in about 36 to 40 days; however, if an unknown adult male (the father's urine has no effect) urinates near the young female, it will take six days less to reach sexual maturity. This observation can be interpreted to mean that the young female has a higher chance of mating with the unknown male in this way. However, the dominant male will try to prevent mating, which means that the strongest male will mate with the female. In females that have recently been mated but whose fertilized egg cells have not yet implanted themselves in the uterine wall, the smell of an unknown adult male can prevent the beginning of the gestation period and instead trigger the willingness to mate again; thus the unknown male has a chance to mate, but even in such a case the fight with the resident, dominant male will ensure that the strongest male mates with the female. In females that are not pregnant, the smell of an unknown adult male has the effect of shortening the estrus and triggers the willingness to mate.

The females of house mice often live together in groups and share the rearing of the offspring. The smell of pregnant females ensures that other females are ready to mate earlier. If more than three females live together and wait for a mating, they give off an odor with the urine, which delays sexual maturity by 20 days in non-sexually mature females and stops the cycle in other adult females. Both mechanisms can be interpreted to mean that they ultimately ensure rapid reproduction in good conditions and prevent overpopulation.

Other house mice showed escape reactions to the urine odor of a frightened conspecific (with certain contained “frightful substances”) , so house mice can be said to have a fearful odor. The scared smells are transferred from the frightened animal to surrounding objects when they are touched, where they only subsided after seven to eight hours in experiments and were no longer detectable after 24 hours. The sexes react differently to the smell: A avoidance reaction is triggered in the urine of a same-sex animal with a deterrent, and the horror urine of males affects females as well. However, female horror urine causes an attractive response in males. This frightening urine is probably put in danger, perhaps as a warning to conspecifics. According to the results of a study on this, only house mice more than 18 days old react with a startle reaction to the urine mentioned.