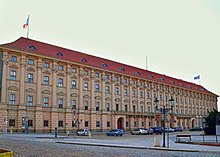 Palais Czernin - Ministry of Foreign Affairs of the Czech Republic

Palais Czernin from the west

The Czernin Palace ( Černínský palác ) in Prague is a palace on the Hradschin opposite the Prague Loreto .

The construction, which was started by Count Humprecht Johann Czernin von Chudenitz in 1669, is on the edge of the Hradschins on Loretánské náměstí (Loreto Square ). Francesco Caratti is considered an architect . In 1673 construction was accelerated after Emperor Leopold I announced a visit. However, this almost drove the count into financial ruin.

The palace was hardly inhabited, as the social life around the imperial court mainly took place in Vienna , where the Czernin family was also settled (see: Palais Czernin (Vienna) ). As a result of acts of war it was damaged several times and looted by the French. Emperor Joseph II refused the purchase. From 1851 it served the army as a barracks under Emperor Franz Joseph I. and was ruthlessly rebuilt. Later the palace also partially served as an orphanage.

Under President Masaryk , the palace was restored from 1928 according to original plans in order to serve as the foreign ministry of Czechoslovakia . During the German occupation, the Deputy Reich Protector Reinhard Heydrich resided here .

After the Second World War, the palace again served as the foreign ministry and in March 1948 it was the scene of the “third lintel in Prague” , to which the non-communist foreign minister Jan Masaryk fell victim after the communist February coup .

Today the Ministry of Foreign Affairs of the Czech Republic is located in Palais Czernin .

The front of the palace measures 150 m and is structured by 30 columns. The balcony and portico were not added until 1747 by Anselmo Lurago . The interiors were completed by Franz Maximilian Kaňka around 1720.