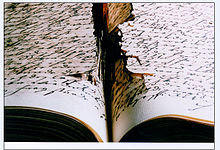 Paper disintegration due to ink corrosion 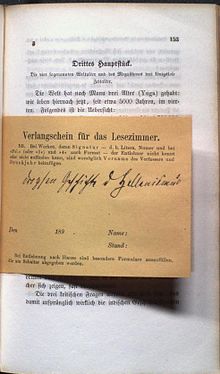 As paper degradation or even paper feeding is called the aging-related resolution paper , often by the action of existing in the material acids ( acid decay is triggered), but can be accelerated by external influences.

Causes due to material and manufacturing process (endogenous) 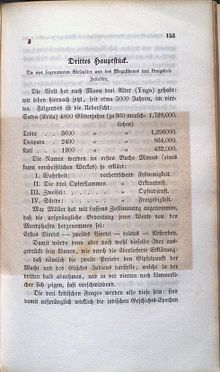 Today, paper gets its structural stability through the use of cellulose fibers made from pulp . This has different strengths, depending on its origin and treatment. In traditional paper production in Europe, the fiber material was obtained from rags, rags , mechanical crushing and rotting in pits. Stampfwerke and Holländer ensured a suitable fiber length for the drainage. To prevent the lettering from leaking, paper was soaked with animal glue ( gluing ). This made the paper weakly alkaline, as this glue was obtained by boiling offal, such as skin, bones and claws, under alkaline conditions.

The Darmstadt pharmacist Friedrich Illig first replaced animal glue in 1807 with a mixture of resin with potassium aluminum sulfate (alum). The sizing became independent of the availability of animal glue, but the potassium aluminum sulphate gave the paper a low pH value and became acidic. This was absolutely desirable in papermaking because this additive improves the fiber binding capacity. If the paper is stored for a long time, however, a low pH value of the paper leads to the destruction of the cellulose chains, as these are linked by acid-sensitive acetal bridges, and the fiber composite of the paper disintegrates as a result of this process. The degradation of the cellulose macromolecules to smaller molecular units causes a decrease in flexibility and tear resistance of the paper concerned.

The presence of acid can also cause problems with paper made from rag. Writing ink was once common in tannins on Gallapfel base with iron sulfate produced. In the case of old manuscripts, this can in the long term cause the paper to be destroyed by ink corrosion . The acidic ink also destroys rag paper (see picture).

The use of alum to accelerate floc formation ( flocculation ) allowed higher speeds and better paper machine productivity. For more than a hundred years, paper has been machine made at low pH. Aluminum sulfate or alum were used in large quantities. The simultaneous use of pulp with relatively short fibers and inadequately digested wood pulp portions led to paper with low tear strength and high acid content. Since the vast majority of paper products, such as newspapers, do not need long shelf life, this was not seen as a major problem.

Today other flocculation systems exist that allow calcium carbonate to be used as a filler. They form an alkaline reserve in the paper, which prevents the disadvantageous acetal cleavage of the cellulose chains by acidic paper constituents.

Today chalk is used in large quantities as a filler for many types of paper in paper production. Waste paper now contains so much chalk that even inexpensive types of paper, such as newsprint , are made from waste paper under neutral to slightly alkaline conditions. This is why these types of paper are more stable in their aging process.

Another endogenous factor that can accelerate paper disintegration is wire stapling (steel wire) which, in the event of rust formation, contributes to the destruction of the adjacent paper in the fold area and thus to the destabilization of the book block.

External influences on paper disintegration are primarily moisture, which enables pests (e.g. mold) to develop , heat, which accelerates the aging of the paper as well as all other chemical reactions, and light. When handling paper, it can also be contaminated with sweat. Contact with other acidic materials also has a negative effect, e.g. B. with folders made of acidic materials. Air pollutants such as B. formaldehyde , sulfur oxides , nitrogen oxides or ozone can accelerate paper disintegration. Other factors that promote paper disintegration are the use of post-its and adhesive tape . Mechanical influences such as opening books at a wide angle (e.g. to 180 °) are also harmful.

As a result of fire exposure, partially damaged cultural goods made of paper can suffer additional consequential damage through thermal destruction in transitional areas and discoloration in addition to the immediate loss of substance through exposure to fire. The affected areas char or show a loss of mechanical stability in varying degrees.

In addition to insect infestation, for example by rodent beetles (bookworms) or silverfish , squid and mold , acid-related paper disintegration is one of the greatest challenges for the preservation of holdings in archives and libraries . There are various methods to stop the disintegration, by means of deacidification temporarily or more laboriously, permanently through cracks in paper . Paper damaged by moisture can be treated by freeze drying .

The term " aging-resistant paper" is of relative significance because every material is subject to aging. What is meant here is a paper that contains little or no ingredients that accelerate its aging. It is primarily about acidic components or acid-releasing ingredients as well as components that cause accelerated aging in the form of yellowing and brittleness through exposure to air, temperature and light . Since the invention of groundwood papiers by Friedrich Gottlob Keller around the year 1841, which accelerated the mass printing of the 19th century, the problem of aging paper to a central problem of industrial society.