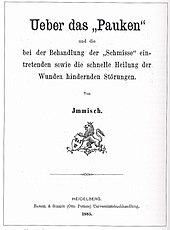 Title page of a medical publication by Friedrich Immisch

The learning and practicing of academic fencing with striking student associations is called timpani . The term is now in a figurative sense for intensive and mechanical learning or memorization before an exam.

Pauken comes from the Middle High German word pûken and originally means "to beat". In the 18th century, cramming was understood to mean both a brawl and a fight. Up until the first half of the 19th century, fencing with sharp weapons, i.e. the scale itself, was called timpani . This meaning is still preserved in many compound expressions that relate to the length of the scale, such as Paukbrille , Paukarzt , Pauklokal or Pauktag .

The narrowing of the meaning to practice only took place in the second half of the 19th century. Still later, was from this in the students language the ( Auswendig- ) Learning learned material in the school or at the university derived.

When drums during the so-called Paukstunde taking into account the respective Paukcomments the technique of academic fencing learned. For this purpose, timpani clubs with blunt blades and other protective measures, especially a timpani helmet, are used.

In the case of compulsory and facultative connections, drumming is mandatory for the active members, for free-beating it is optional. The fencing lessons are organized by the fencer .