Pearl Harbor [ ˌpɝːlˈhɑːɹbɚ ] is a port and headquarters of the Pacific Fleet of the United States Navy on the island of Oahu , Hawaii , United States . He became known worldwide through the attack by the Japanese armed forces on December 7, 1941 on the US Pacific Fleet during the Second World War , which caused the USA to enter the war . Pearl Harbor Base is a National Historic Landmark . 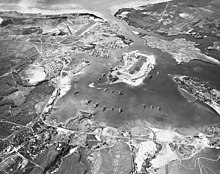 Pearl Harbor in October 1941; in the middle Ford Island , to the left the battleship berths, Battleship Row (battleship avenue)

In 1908 the Navy began to build a shipyard . In 1911 an eleven meter deep canal was completed, which gave large ships access to the open sea through a sandbar and a coral reef. The harbor basin has a maximum depth of 18 meters.

The port became world famous through the Japanese attack on Pearl Harbor , which triggered the United States' entry into World War II . In the air raid in the morning hours of December 7, 1941 , 2403 Americans died; the naval base was damaged.

One of the sunk battleships USS Arizona (BB-39) , like the crew that sank with the ship, was never recovered - the wreck lies on the seabed of Pearl Harbor. A floating memorial, the USS Arizona Memorial , was anchored over the Arizona wreck and can be visited by small boat. The oil that emerges from the wreck to this day and that can be observed on the surface of the water is called "Tears of Arizona". The museum ship USS Missouri (BB-63) has been moored in the immediate vicinity of the Arizona Memorial since 1998 . The unconditional surrender of Japan was signed on September 2, 1945 in Tokyo Bay on this battleship .

Pearl Harbor has been a National Historic Landmark since January 29, 1964. On October 15, 1966, the naval base was added to the National Register of Historic Places as a Historic District . In 2008, then US President George W. Bush combined several memorial sites, including several in Pearl Harbor, under the roof of the new World War II Valor in the Pacific National Monument . Since January 31, 2010 Pearl Harbor belongs to the Joint Base Pearl Harbor-Hickam .