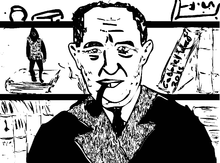 Boulle, the son of a lawyer from Avignon, studied electrical engineering after finishing school in Paris. After graduating, he moved to the Far East, where he worked as a rubber planter in Malaya from 1938 . During the Second World War he fought with the French Free Forces in China , Burma and Indonesia . In 1942 he was taken prisoner by Japan, from which he escaped in 1944. In his famous work Die Brücke am Kwai , he processed his war experiences, especially his imprisonment in Southeast Asia. In order to maintain the will to survive, he got some writing materials from the camp in order to secretly record his experiences. After the war, he first settled in Malaysia , but finally moved back to France in 1948. When he returned there, he devoted himself to actual writing.