Pius Keller (born September 30, 1825 in Ballingshausen , † March 15, 1904 in Münnerstadt ) was a German Augustinian hermit . He is considered a restorer of the Augustinian order in Germany.

Pius Keller grew up as the son of simple farmers in Lower Franconia . Because of his great intellectual talent, the church made it possible for him to attend a higher education. Shortly after his ordination , he entered the Augustinian order in 1849 . In 1853 he was elected prior of the Münnerstadt monastery . For a total of 53 years, Pius Keller performed leadership functions in his order as prior, general commissioner and provincial . Thanks to his commitment, the Bavarian-German Augustinian Province was rebuilt. Within the order he implemented an improvement in monastic discipline. 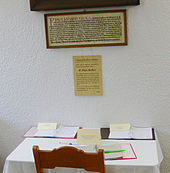 According to reports from contemporary witnesses, Pius Keller was a gifted preacher with a deep love for sacramental confession and had a reputation for holiness during his lifetime . He died on March 15, 1904 in Münnerstadt and was buried in the monastery church there. The diocese of Würzburg opened the beatification process in January 1934 .