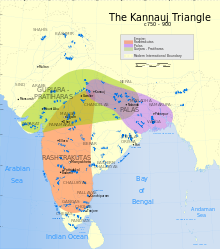 In the 8th / 9th In the 18th century, three great dynasties vied for supremacy in northern and central India: the Pratihara, the Rashtrakuta and the Pala

The Pratihara were a dynasty in northwest India (about 725-1036), which is attributed to the Rajputs or their tribe of Gurjara, so that it is also called Gurjara-Pratihara. In their heyday, the Pratihara rulers ruled over large parts of northern India and also took on the defense against the Muslim invaders, the Arabs in Sind and later the Ghaznavids .

The word pratihara means something like (door) guardian, governor (bailiff) or protector. Most historians therefore assume that the Pratiharas originally had high-ranking, but ultimately serving or military tasks at the court of the Rashtrakutas .

The Brahmin Harichandra (6th century) is mentioned as ancestor . The first historical figure of the dynasty was a certain Nagabhata. He sat in Avanti (in West Malwa ) and threw the troops of the Arab governor of Sindh , Junaid, from Ujjain and Malwa (around 725-40).

Vatsaraja (ruled about 775-805), who became the actual founder of the Pratihara power through the union of the Gurjara clans, expanded his empire around 783 over the Rajputana and parts of north-west India. He defeated the Pala King Dharmapala (ruled about 775-810) at Prayagraj, but was defeated by the Rashtrakuta King Dhruva (ruled about 779-793) around 786.

The game was repeated under his son Nagabhatra II: he was able to snatch Dharmapala's vassals from Kannauj and defeat Dharmapala himself at Monghyr. But in 806/07, the Rashtrakuta Govindra III attacked. (ruled until about 813) and his brother Indra with two armies advancing quickly northwards and defeated Nagabhatra II, who fled into the desert of Rajasthan. Nagabhatra II was ultimately able to hold Kannauj, but only at the price of concessions; so he had to tolerate the Chandella chief Nannuka as his liege lord.

Only Bhoja Adivaraha (ruled around 836-885) finally moved his residence to Kannauj in 836. Bhoja and his successor Mahendrapala (ruled around 885–908) introduced a luxurious and overly refined court life there and held northern India together with several victories. Kannauj was expanded and became a center of art (architecture, poetry, music); the work of the poet Rajashekhara falls during this time. Due to the later Islamic conquest, however, not a single representative temple building from this period in the vicinity of Kannauj has been preserved.

King Mahipala (ruled around 914–943) was already threatened by internal strife despite his four large armies, Kannauj fell briefly to Rashtrakuta Indra III around 915/16, whose general Narasinha pursued him through the country. The assassination of Indra III. in 917 and the support of Chandella Harshavarman and Guhilot Bhatta saved Mahipala; his vassals drove the Rashtrakuta out and put him back on the throne.

As a result, the power of the vassals increased steadily. Above all, the Pratihara kings were now dependent on the Chandella , who took on the role of the house keepers: In 954, King Devapala had to cede the imperial shrine, an idol of Vishnu, to the Chandella Vasovarman (ruled around 930-950) and in the 960s it went to his Successor Vijayapala lost large lands to the Chandella Dhanga (ruled about 950-1002). Nevertheless, they were still formally recognized as feudal lords , albeit with little respect, because the Chandella were now the real masters of northern India - until Mahmud came from Ghazni .

In the fight against the Muslims of the Mahmud of Ghazni, the king Rajyapala was left in the lurch by his long-independent vassals (as if there were the Chaulukya or Solanki , Chauhan , Paramara , Tomara , Kalachuri and of course the Chandella); the Chandella Ganda (ruled around 1002-25) even stabbed him in the back. Rajyapala fled from Kannauj, was accused of being a “traitor”, defeated by the Chandella and other princes and finally murdered (1018). His successor Trilochanpala lost Kannauj and fled to Prayag . The last Pratihara ruler died in 1036. 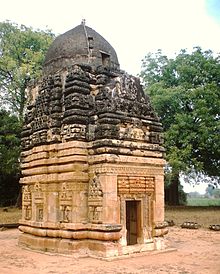 Amrol , Ramesvara Mahadeva Temple (c. 750); the dome replaces the top of the Shikhara tower - perhaps destroyed by lightning strike - and was probably added in the 19th century. Typical of the early Pratihara style is the abandonment of a raised walk-around platform ( jagati ) and a laterally open pillared vestibule ( mandapa ) - this is instead replaced by a small, laterally closed vestibule ( antarala ). Also jali window can not be found. Characteristic, on the other hand, are the developing, multi-tiered Shikhara towers and the decorative panels ( udgamas ) made from window niches ( chandrasalas ) above the outer wall niches and in the Shikharas.

In their heyday (approx. 725–950), the rulers of the Pratihara dynasty , who followed Hinduism , were very active donors of temple buildings in central India - probably also for reasons of power politics. The so-called 'Pratihara temples' extend from Gwalior ( Teli-ka-Mandir ) and its surroundings ( Naresar , Bateshwar , Amrol ) to the north of Vidisha ( Badoh , Pathari , Gyaraspur ). Several relatively well-preserved Pratihara temples can also be found in the wider area of Lalitpur : Indor , Mahua , Terahi in the northwest, Deogarh in the south and Markhera in the northeast. Probably the most beautiful and last temple (approx. 950) in the Pratihara style is in Barwasagar (approx. 25 km southeast of Jhansi ). Many temple buildings - not only from the Pratihara period - were largely destroyed during the time of the Islamic conquests in northern India.