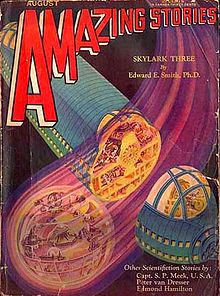 Pulp magazines , often simply called pulps , were magazine magazines containing literary stories from various literary genres that were popular in America from the 1930s to 1950s. The first pulp was Frank Andrew Munsey's magazine Argosy in 1896. Most of the few pulps still produced today fall into the genres of science fiction (SF) and mystery . The name "Pulp" is derived from the cheap, wood-containing paper ( English wood pulp, see wood pulp ) on which the magazines were printed. Pulp is colloquially referred to as " trash and trivial literature ". Pulps were the successors to the penny novels of the 19th century. Numerous respected authors have written for Pulps. Today they are best known for their sensational, sensational stories.

Many classic science fiction books and crime novels originally appeared in pulp magazines such as Weird Tales , Amazing Stories or Black Mask . The popularity of the pulps decreased in the 1950s. With the cost of paper rising, and competition from comics , television, and paperbacks , the pulps lost their readership.

Pulp magazines were available for the following genres, among others:

Key magazines between WWI and WWII :