Rheostat based on a drawing by Charles Wheatstone

A rheostat is a historical design of an adjustable electrical resistance for high electrical performance and / or high precision and stability (temperature stability, long-term stability, good contact).

The principle of the rheostat was invented by Charles Wheatstone in 1840 . It consists of a cylinder made of non-conductive material, in the historical design mostly ceramic , around which a resistance wire, for example made of constantan , is wound. The resistance wire must be surrounded by an insulating layer (for example a coating of an electrically insulating lacquer layer as with enamelled copper wire ) so that the adjacent turns do not cause a short circuit . The sliding track of the sliding contact must be freed from the insulation (for example with fine sandpaper or a glass hair brush ). The desired resistance can be set using an electrical sliding contact that is moved over the resistance wire without interrupting the circuit.

Step resistors or even resistance decades have suitable switches such as rotary switches , which usually switch on 10 identical individual resistors one after the other without interruption. 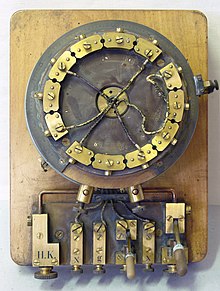 Historic Thomson bridge for measuring small resistance values. The bridge has a circular plug rheostat in the upper part of the picture

The plug rheostat is another way of changing resistances without interruption, but also in steps. With him, partial resistances of a resistor chain are short-circuited with conductive plugs.

Similar to rheostats or step resistors, starting resistors were designed to start electrical machines or trams gently. Since they lead to a loss of efficiency , they are no longer found in this application today.

Rheostats are still used today in electrical laboratories, among other things, as adjustable electrical loads.

In contrast to the German-speaking area, the term rheostat is used, especially in Anglo-Saxon parlance, for various types of commercially available wire potentiometers . An example of this is the helical potentiometer, in which the contact runs on a bifilar winding made of resistance wire. They are multiple turns (more than one turn from the beginning to the end of the resistance) and are sometimes used as input devices (e.g. pulse duration, frequency) in laboratory devices. Another related application is angle encoders in rotary encoders or potentiometer encoders .