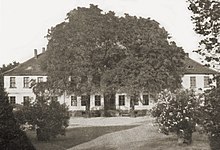 Manor of the Franzburg Manor around 1912

The Franzburg manor was a manor in Gehrden in Lower Saxony that was built around 1650. The manor house was demolished in 1967. Only parts of the manor wall and the gate structures remain. The former estate park is now open to the public as Ottomar-von-Reden-Park .

The forerunner of the manor complex was Gehrden Castle as a small medieval fortification east of the town center. The fortification was called Franzburg . The castle was a fief connected, which was owned by the family of Sürssen. After the end of their sex, Franz von Reden was enfeoffed with the estate in 1590. Nothing is known about the decline of the castle. In 1650 Franz von Reden built the Franzburg as a manor about 500 meters south of the former castle site. The Franzburg buildings were renovated as half-timbered buildings in 1780 . This included a two-storey mansion, a park-like garden with ponds and old trees. According to a description from 1912, it was in good condition. At the time, the estate had 330 hectares of land, including almost 50 hectares of forest.

Entrance to the former estate

Ground plan of the demolished mansion indicated by the foundation wall

The walled park of the former manor is now a cultural monument .