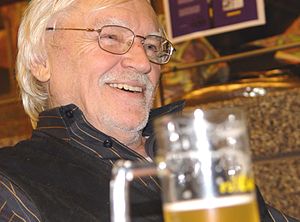 Manderscheid attended the Athenaeum in Luxembourg from 1946 to 1952 and then worked for a short time as a teacher. From 1953 to 1956 he was a reserve officer in the army , from 1956 to 1973 a railway official at the Ministry of Transport and from 1977 to 1993 an official at the Ministry of Education. He was a member of the PEN Center Germany and until 1997 President of the Luxembourg Writers' Association (LSV), since 1997 Honorary President.

His best-known work is a Luxembourgish novel trilogy, the first volume of which, Schacko Klak , was filmed in 1989 under the direction of Frank Hoffmann and Paul Kieffer . In this book he tells how he felt about wartime as a boy. This was followed by De Papagei um Käschtebam with scenes from the post-war period and Celebration a Flam .