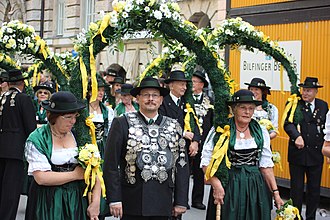 The title “ Schützenkönig” comes from the tradition of civic shooting . There are no uniform regulations for determining a new shooting king, but each shooting club determines these itself. The shooting for the king's title is usually carried out during a shooting festival . For the subsequent proclamation of the new shooter king, he is picked up from his home or a local inn and his court and accompanied in a large procession to the fairground or the marquee. The celebrations of the Schützenfest can last for several days.

Determination of the shooter king

In most shooting clubs, all adult male members from the age of 18, less often from the age of 16, can participate in shooting for the title of king. In more and more clubs, women are also allowed to shoot as members with equal rights. When shooting, either a normal ten ring target is used or shooting targets with wild motifs (deer, fox, boar, etc.) are used. Some shooting clubs also determine their king at a bird shooting . Air rifles or small-bore rifles are usually used in royal shooting . The term of office of a marksman king is usually one year.

The best shooter determined according to the respective regulations receives the title of shooting king . The second best marksman is often called first knight , and the third best marksman is called second knight . In some places the shooter of the worst scoring shot is also or instead referred to as the Smurf King . Other special knights, such as the Schnappritter , who is allowed to "snap away" all beers not yet drunk at the subsequent royal celebration and then have to drink empty in one go, are common in many clubs and are shot separately.

At many shooting festivals, the rifle king sometimes appoints ministers , most of whom come from his rifle club or relatives.

In some clubs, the dignity of the shooter king is not carried out between all shooters, but only among those who have signed up for it on a list. At large shooting festivals, the candidate's personal finances must also be disclosed for this registration, as the reign can be associated with considerable costs for the dignitary.

Traditionally, the wife of the marksman king is called the marksman queen. Until the 1960s it was uncommon for women to participate in shooting. In the course of the efforts for equality this has been changed in most of the clubs. One went over to identify a marksman queen by shooting her own. When this happens, the second and third best marksman are referred to as First Lady and Second Lady in Court or also as First and Second Princess.

Many reigning majesties appoint an adjutant for the coming shooting year . He supports the king and visits neighboring rifle festivals with him as a representative.

The People's King is a separately imposed title for non-club members from the local environment, which is also usually imposed during a shooting festival.

In addition to royal shooting, various shooting clubs also offer the option of shooting for the title of rifle emperor . As a rule, only former marksman kings are allowed to participate. The term of office of a marksman emperor usually lasts longer than that of a marksman king. 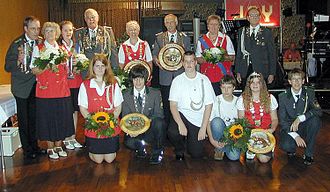 The rifle king, rifle queen and youth king with their entourage, the knights and court ladies, together form the royal house .

The rifle king usually wears a royal chain as official insignia , on which the year of his title win is recorded on small metal plates. In traditional clubs in particular, these king chains can have a considerable weight over time due to new attachments.

In Bavaria and Lower Saxony it is also common that a wooden king's disc with the hit image of the shooting king is attached to the gable of his house. In uniformed shooting clubs, the king receives a clasp or a medal with the year, which he can wear even after his term of office as king has expired.

In the club life of rifle clubs, the rifle king or the rifle emperor has only a representative character these days. In the old days, however, winning the title was sometimes even associated with tax exemptions. Since the best shooter could "shoot himself free" from his tax levies, some shooting festivals that refer to this tradition are still called free shooting today , such as the Lower Saxony free shooting festivals in Eldagsen , Peine and Wennigsen (Deister) .

Protect club kings can participate in the King shooting the parent rifle formations rise and so are at the county or Gauebene for "Federal Blaster" or at the state level to the "country Blaster".

The traditional shooting clubs have different difficulties in recognizing the living conditions of their shooting kings when they stand in contrast to the traditional worldview.

In 2012, Lower Saxony became a gay shooter king. In 2011, one of the largest German rifle associations banned the appearance of a gay royal couple. The Klever Schützen decided to name the king's companion " Prince Consort ". In 2009/2010 in Dormagen the life partner of the local rifle king was called his " adjutant ". The gay and lesbian shooting association was founded in Cologne in 2012. The first majesty here was a king with his prince consort.

The Schützenkönig von Sönnern in 2014, Mithat Gedik, is not recognized by the Federation of Historic German Rifle Brotherhoods because he follows Islam . The statutes of the Sönnerner Schützenverein actually exclude the membership of non-Christians.

A fatal accident overtook the reigning rifle king of the St. Magnus Niedermarsberg rifle brotherhood on July 11, 2015 during the traditional rifle festival: parts of the device from two of the three cannons tested by the state fire department (cast in the Olsberger Hütte) belonged to the historical riflemen Obermarsberg 1843 burst under the pressure of the explosion, the metal parts, which were thrown backwards with great force, were the only ones in a group of people standing around to hit the 30-year-old man, who died of his fatal injuries despite an emergency operation in the Marsberg hospital.